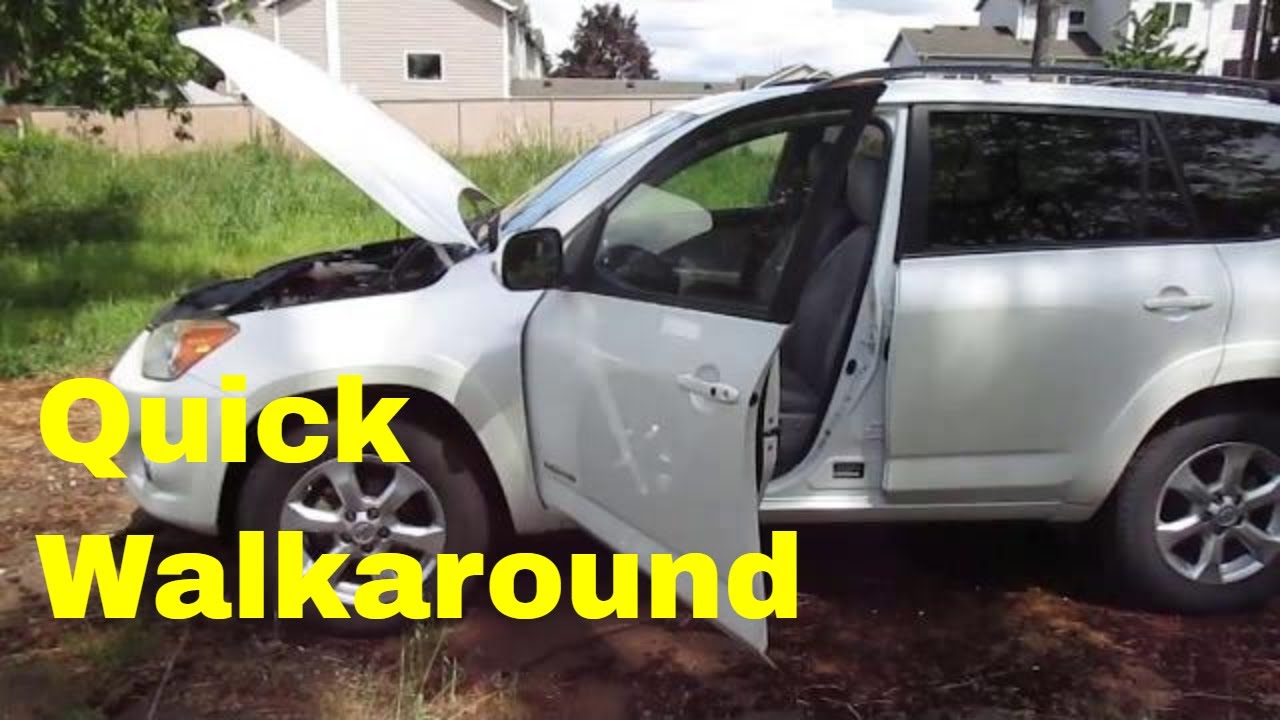 The highly-ranked 2009 Toyota RAV4 is a compact crossover SUV that offers a spacious interior, multiple engine options, and a comfy ride, as well as a third-row of seating, which makes the 2009 Toyota Rav4 an exceptional choice for anybody searching for a practical family vehicle.

The Toyota RAV4’s 4-cylinder engine gets a horsepower boost for 2009, to 179 hp, which makes it the class leader among rival four-cylinder engines from leading competitors. The fuel economy has increased marginally with this engine also. A contemporary grille and bumper design further update the most recent RAV4. With a cavernous 73 cubic feet of cargo space and space for five adults, the 2009 Toyota RAV4 presents a wonderful balance of roomy functionality and ease of maneuverability. There is even a third-row seat available, even though it’s only roomy enough for kids.

Spacious, comfortable, and easy to drive, the 2009 Toyota RAV4 is a top choice for a compact crossover SUV, particularly if you want a V6 or a usable kid-size third-row seat. 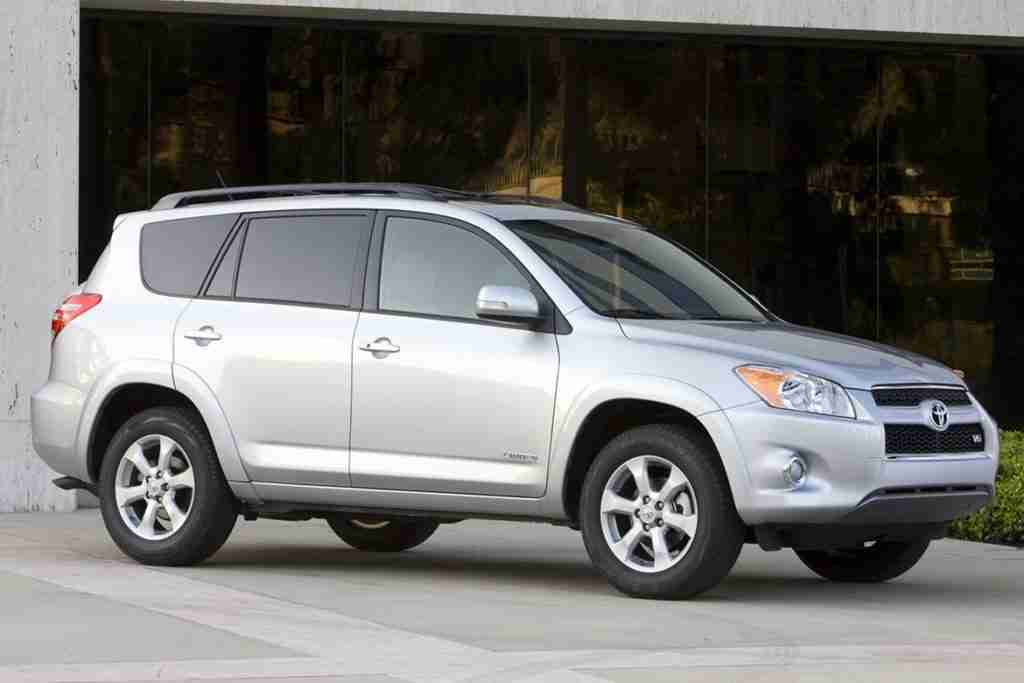 When it was brand-new critics enjoyed the Toyota RAV4 because it had ample passenger space and comfy seats, a strong V6 engine choice, and a great deal of cargo space. Additionally, you can option a Toyota Rav4 with a third-row, and while many critics did not find it quite comfortable or roomy, additional seats for smaller children could come in handy. The RAV4 also has excellent safety ratings.

The 2009 Toyota RAV4 is available with either a 179-horsepower four-cylinder engine or a 269-horsepower V6. Toyota implemented a totally new four-cylinder engine for 2009, and critics said that while it is not especially stout, it gives adequate thrust for everyday driving. Most critics, however, favored the optional V6, making the RAV4 considerably faster without taking a massive toll on fuel economy. With front-wheel drive, a four-cylinder model achieves 22/28 mpg city/highway, while V6 models average 19/27 mpg, each of which is commendable for the course. Choosing all-wheel drive reduces fuel economy only marginally.

2009 RAV4’s cabin was generally well-liked by critics, who said it’s well-designed and provides ample space for passengers and their cargo. With the rear seats folded, the 2009 Toyota RAV4 can carry around 73 cubic feet of cargo, which is extremely great for the class. The RAV4’s rear tailgate opens to the right, as opposed to up overhead as do many rival liftgates, and a few critics found this to be a pain occasionally. Some reviewers also found interior material quality somewhat below their liking. Higher model levels deliver added features like satellite radio, a CD changer, leather seats, dual-zone climate control, and a power sunroof. A navigation system and backup camera can be found on Sport and Limited trims also. 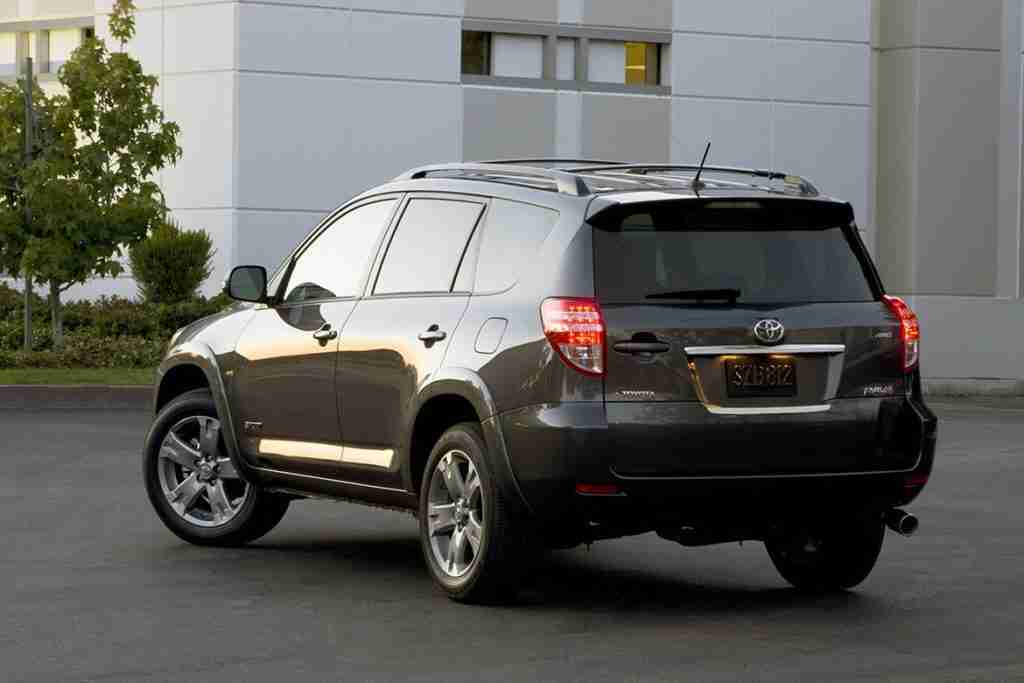 The 2009 Toyota RAV4 crossover SUV is available in three model levels: Base, Sport, and Limited. Seating for five is standard. An optional third row on the entry-level model and Limited model levels raises seating ability to seven people.

Standard features for the entry-level model RAV4 comprise of 16-inch steel wheels and tires (17-inch alloys are optional), power windows and doors, keyless entry, cruise control, a tilt/telescoping steering wheel along with a six-speaker stereo with a CD/MP3 player and an auxiliary audio jack.

The Sport includes 18-inch metal wheels and tires, rear tinted windows, a sport-tuned suspension, foglights, heated side mirrors, and many outside details.

The range-topping Limited model gets 17-inch wheels and tires for a smoother ride, dual-zone automatic climate control, a leather-wrapped steering wheel along with an in-dash six-CD changer with satellite radio.

Options for the 2009 Toyota Rav4 include a Sport Appearance Package for the V6 4WD models which will help you get run-flat tires, a distinct rear door with no mounted spare tire, and an upgraded audio system with a six-CD changer and satellite radio. Optional on the Limited and Sport trims are a sunroof, leather seats, a power driver seat, a backup camera, and an updated nine-speaker stereo system with satellite radio and Bluetooth. Exclusive for the Limited model is optional heated front seats and a rear-seat DVD entertainment system.

A stronger four-cylinder motor, a restyled grille and bumpers, and the adoption of active headrests for front seats mark the changes for the 2009 Toyota RAV4. 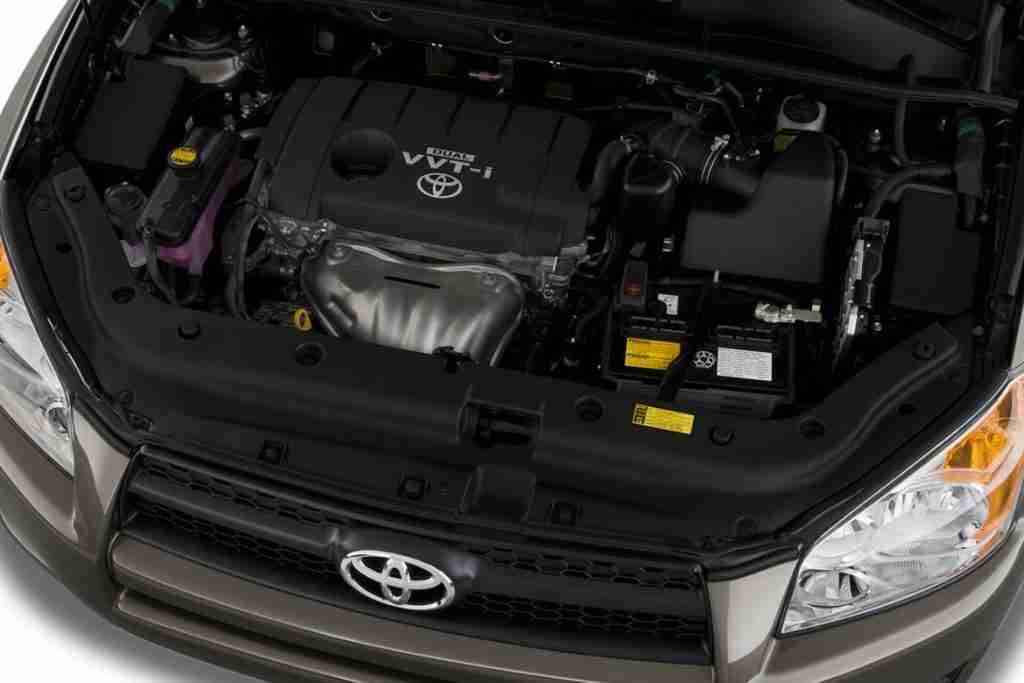 The 2009 Toyota RAV4 comes standard with a contemporary 2.5-liter four-cylinder that provides a healthy 179 hp and 172 pound-feet of torque. A four-speed automatic transmission is standard. Optional on all configurations and combined to a five-speed automatic transmission is a 3.5-liter V6 which produces an impressive 269 hp and 246 lb-ft of torque. In performance testing, the RAV4 V6 4WD delivered an extremely quick 0-60 time of 7.2 seconds.

All 2009 Toyota RAV4s can be outfitted with either front-wheel or four-wheel drive. Front-drive versions have a limited-slip differential. In 4WD versions, the electronic 4WD system sends the majority of the ability to front wheels and tires until slippage is detected, at which point ability is also sent to the rear wheels and tires. Unlike most competing vehicles, the 2009 Toyota RAV4 provides a genuine 4WD lock feature that fixes the front/rear ability split 50/50, which is useful for driving in snow and mild off-roading.

The EPA estimates a four-cylinder, front-drive RAV4 gets 22 mpg in the city/28 mpg on the highway and 24 mpg combined. The 4WD version has a 21/27/24 mpg rating. The V6 gets the exact same fuel economy as four-cylinder crossovers, with 19 mpg city/27 mpg highway and 22 mpg mixed ratings for the front-drive edition. Four-wheel drive causes a reduction of just 1 mpg on the highway.

See also: How To Improve Gas Mileage in Any Car 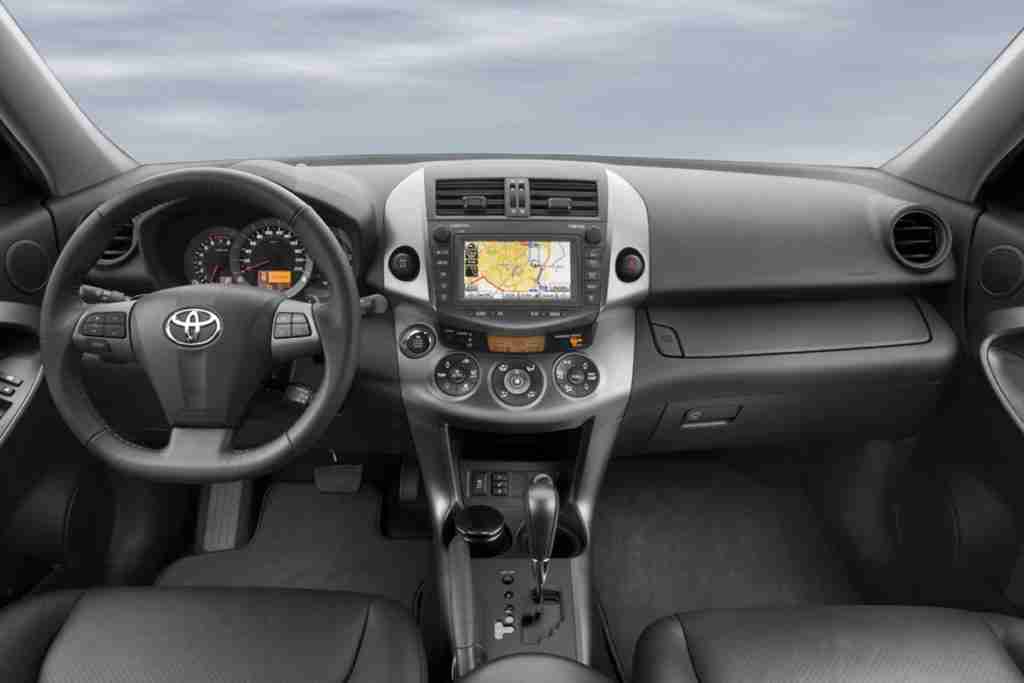 Within the 2009 Toyota RAV4 is a clean layout with large, easy controls and a great deal of storage space. The cabin is not as plasticky as previous-generation RAV4 interiors were, but it still has a budget sense in comparison to rivals such as the Honda CR-V, Hyundai Santa Fe, and Nissan Rogue. Nevertheless, Toyota provides an extremely practical design. The rear seats recline and can slide forward or backward to maximize passenger space or cargo capacity. The normal seating capacity is five, while the available third-row seat bumps it to seven. Though this seat is intended just for children, it’s at least fairly sturdy and spacious.

To configure the RAV4 for freight, all you will need to do is flip a lever. There’s absolutely not any need to remove headrests or fold up chair cushions to have a flat load floor that can hold a maximum of 73 cubic feet of cargo. The load floor is also rather low, which reduces the strain of loading a week’s worth of groceries. However, Toyota’s side-hinged tailgate can be a hassle when you are parked on the road, as it opens toward the curb. 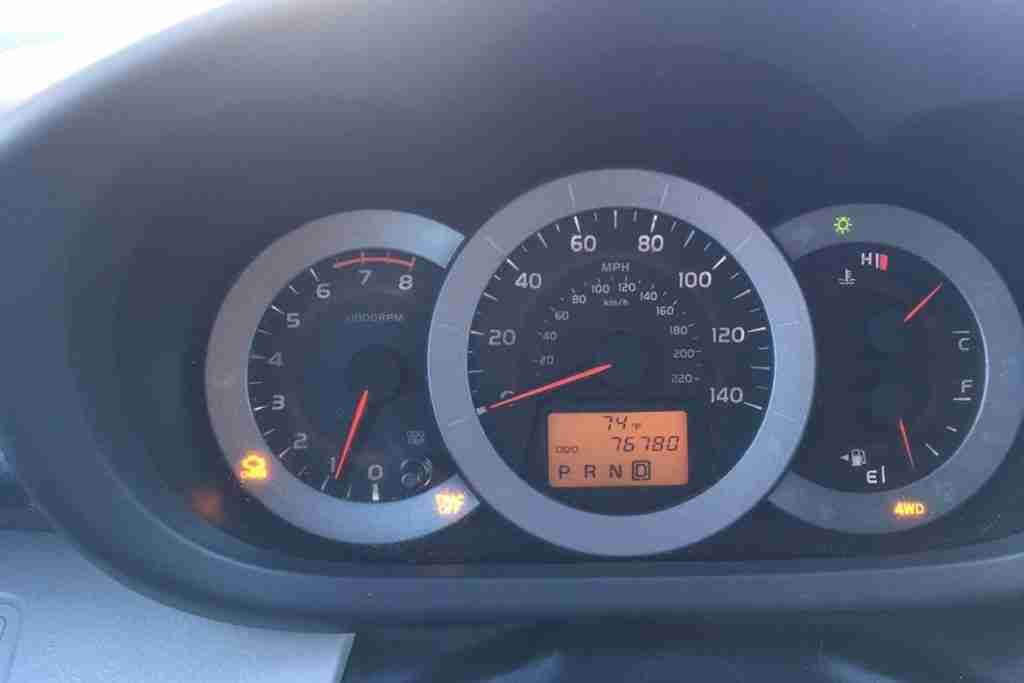 Unlike lots of Toyota products, this 3rd generation of RAV4 has had more than its share of problems. If looking to find an earlier third-generation RAV4 ensure that several recalls are performed. As well, if taking a look at a V6 version, ensure it’s not afflicted by any of the issues listed below.

See my YouTube playlist on the RAV4 paint peeling problem

Early versions of this 3rd generation RAV4 have a good deal of complaints logged on the NHTSA website, namely 2007 and 2008 model years. Besides the issues, safety tech was enhanced on the RAV4 for the 2009 model and again in 2012.

I would suggest a 2009 or after RAV4 with the four-cylinder since it has turned out to be not as problematic. If the V6 is vital, go for a 2010 to 2012 version, ideally in the Sport model as it features a great mix of equipment and worth.

As much as I like the 2009 Toyota RAV4, there are still a few competing models you may want to check out. Family-bound driving fans might enjoy the more intimate connection to the street given by the Mazda CX-7 or Mitsubishi Outlander. And unless you actually require a third-row chair, the Honda CR-V is a more well-rounded and lavish option. Still, the 2009 Toyota RAV4 is difficult to beat for families seeking a vehicle that offers loads of space, capability, features, and value.