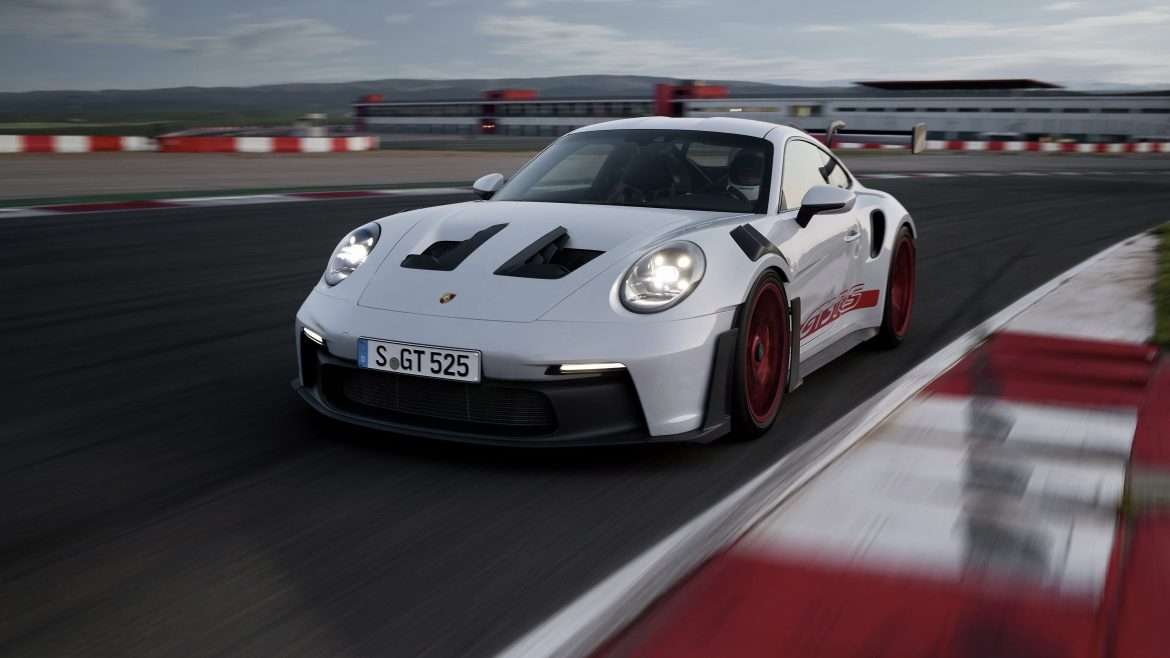 The 2023 Porsche 911 GT3 RS’s goals are unmistakably stated: it is built for maximum performance. The high-performance sports car with 518 horsepower uses racing technology and ideas to the fullest. The cooling and aerodynamic systems of the 911 GT3 RS are what most directly link it to its motorsport sibling, the 911 GT3 R, in addition to the high-revving naturally aspirated motor with motorsport DNA and intelligent lightweight construction.

The 2023 Porsche 911 GT3 RS is a high-performance sports car with extreme aerodynamics and is purpose-built for performance. By spring 2023, dealers in the United States should start receiving the 2023 911 GT3 RS. The initial MSRP of $223,800 for processing, delivery, and handling.

The idea of a central radiator, first implemented in the Le Mans class-winning 911 RSR and later in the 911 GT3 R, is the foundation for a significant performance boost. The new 911 GT3 RS relies on a sizable, angled center radiator in the car’s nose, located where the luggage compartment is in other 911 models, as opposed to the three-radiator layout seen in earlier vehicles. As a result, it has been possible to incorporate active aerodynamic elements into the space created on the sides. More than 900 lbs. of downforce are produced at about 124 mph, which is three times as much as a current 911 GT3 and twice as much as the 991.2-generation predecessor. This is accomplished by continuously adjusting wing elements on the two-part rear wing and the front wing. The total downforce at 177 mph is 1,895 lbs or the same as a Porsche 356 A.

For the first time, a production Porsche has a drag reduction system. The DRS enables the wings to be flattened out at the press of a button, within a particular operating range, to obtain low drag and faster speed on straight sections of the track. The airbrake function positions the wing elements in the front and rear during hard braking at high speeds to aid in deceleration by maximizing aerodynamic drag.

The numerous functional aerodynamic components contribute to the 2023 911 GT3 RS’s purposeful appearance. The swan-neck rear wing, which is considerably bigger in all aspects than the wing of its predecessor, is the most noticeable aspect of the GT sports car. A fixed main wing and an upper blade with hydraulic adjustment make up the rear wing.

The top portion of the rear wing is higher than the roof which is the first time on a Porsche production car. Along with side blades on the front fascia that direct air outward, a front splitter separates the air flowing over and underneath the vehicle. The unique louvered openings in the front quarter panels are used to ventilate the front wheel arches. The iconic Le Mans-winning 911 GT1 served as inspiration for the inlets placed behind the front wheels, which lower dynamic pressure in the wheel arches.

Large nostrils on the front lid of the radiator direct air from the central radiator outward; a little farther back, fins on the roof direct the air outward, ensuring cooler intake temperatures. The openings in the rear side panel of the new 911 GT3 RS are only used to enhance aerodynamics, not to draw combustion air. For improved airflow, the rear wheel arch also has an intake and a side blade. The 911 GT3’s rear diffuser has been modified for the 911 GT3. 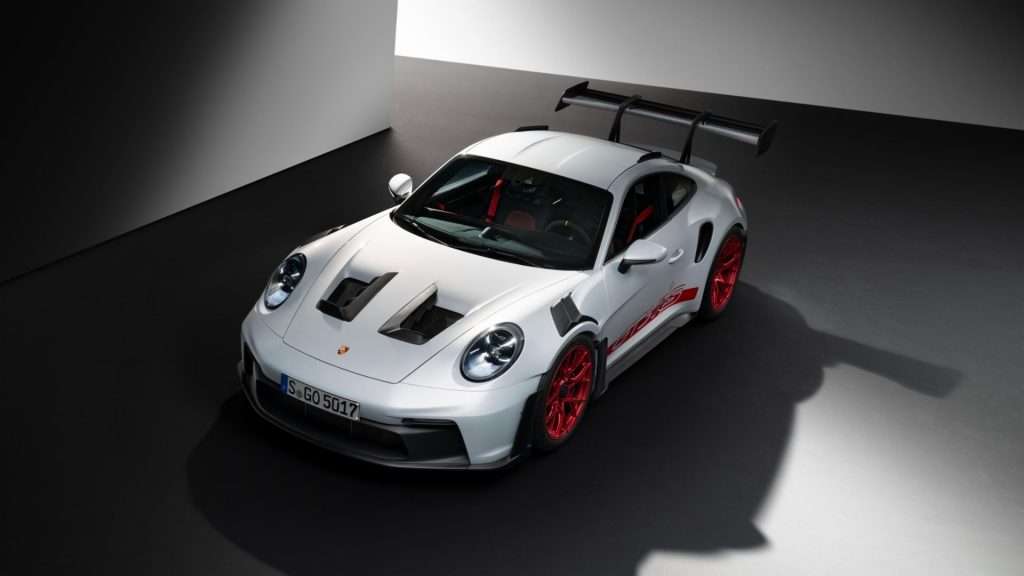 The suspension has even been changed to increase aerodynamics. The parts of the double-wishbone front axle are made with teardrop-shaped profiles because the new 911 GT3 RS’s wheel arches are subject to strong airflows. Other than for high-end motorsport applications, these aerodynamically effective links increase downforce on the front axle by about 88 lbs. at top track speed. The 1.14-inch (29-millimeter) increase in front track width calls for lengthier double-wishbone front axle links.

The suspension engineers have greatly reduced pitching under braking to make sure that the aero stability across the front and rear axles are preserved even when decelerating from high speeds. The front ball joint of the lower trailing arm has now been lowered on the front axle of the 2023 911 GT3 RS. With modified spring rates, the multi-link rear axle was also adjusted. This setup is even more dynamic in terms of the rear-axle steering and driver assistance features.

Three driving options are available on the 911 GT3 RS: Normal, Sport, and Track. The default parameters in Track mode can each be customized. The front and rear axles’ rebound and compression damping, among other parameters, can be altered separately and in various phases. Additionally, the steering wheel’s rotary controls can be used to modify the rear differential. This is accomplished quickly and easily using a motorsports-inspired operating and display paradigm.

The steering wheel has a button for the DRS and four separate rotary controls. During the adjustment procedure, the rotary controls are visibly shown in the instrument panel via graphics. The track screen that is already famous from the 911 GT3 is also present in the 2023 911 GT3 RS. The driver can limit the digital information displayed on the two 7-inch side displays to just what is absolutely necessary by pressing a button. Additionally, the analog tachometer’s left and right shifting indicators were adapted from the GT3 as well. 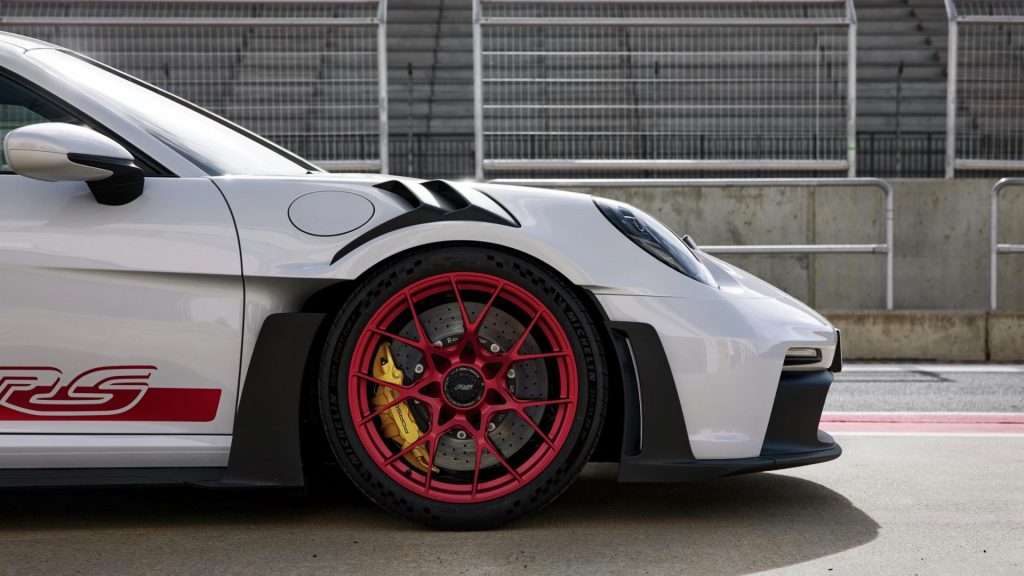 Compared to the 911 GT3, the 4.0-liter high-revving normally aspirated motor has been further improved. New camshafts with changed cam profiles are principally responsible for the boost in power to 518 horsepower (911 GT3 – 502 hp). The stiff valvetrain and single-throttle intake system were inspired by motorsport. This engine features six separate throttle bodies, one for each cylinder, just like the 911 GT3. Air intakes on the underbody help the seven-speed PDK transmission, which has a lower overall gear ratio than the 911 GT3, to ensure that the transmission can resist even the most intense loads during regular use on the racetrack.

The front axle uses disc brakes with a diameter of 408 mm and six-piston aluminum monobloc fixed calipers. The piston diameters have increased from 30 to 32 mm in comparison to the 911 GT3. The discs’ thickness was also enlarged from 34 to 36 mm. The 380-mm rear rotors and four-piston fixed-caliper brakes on the rear axle remain in place.

Since the storied 911 Carrera RS 2.7, intelligent lightweight construction has been a guiding theme for all RS variants. The 911 GT3 RS weighs just 3,268 lbs. thanks to numerous lightweight construction techniques like the significant usage of carbon fiber reinforced plastic. For instance, CFRP is used to construct the doors, front quarter panels, roof, and hood. The standard full bucket seats are made of lightweight CFRP and are covered in black leather and Race-Tex to complement the carbon fiber trim used throughout the cabin to create a pure, athletic atmosphere.

There are many significant improvements to the base car included in the Weissach package, which is an additional expense. Carbon fiber is clearly visible on the hood, roof, some of the rear wing, and the top of the side mirror housing.

In order to further improve the driving dynamics, CFRP is used in the front and rear anti-roll bars, the rear coupling rods, and the shear panel on the rear axle. The Weissach package’s PDK shift paddles with magnet technology from motorsport are yet another standout feature. This creates a pressure point and a distinct click that makes shifting gears seem very accurate. The Weissach package includes forged magnesium wheels, which reduce unsprung weight by 17.6 lbs when compared to normal wheels. 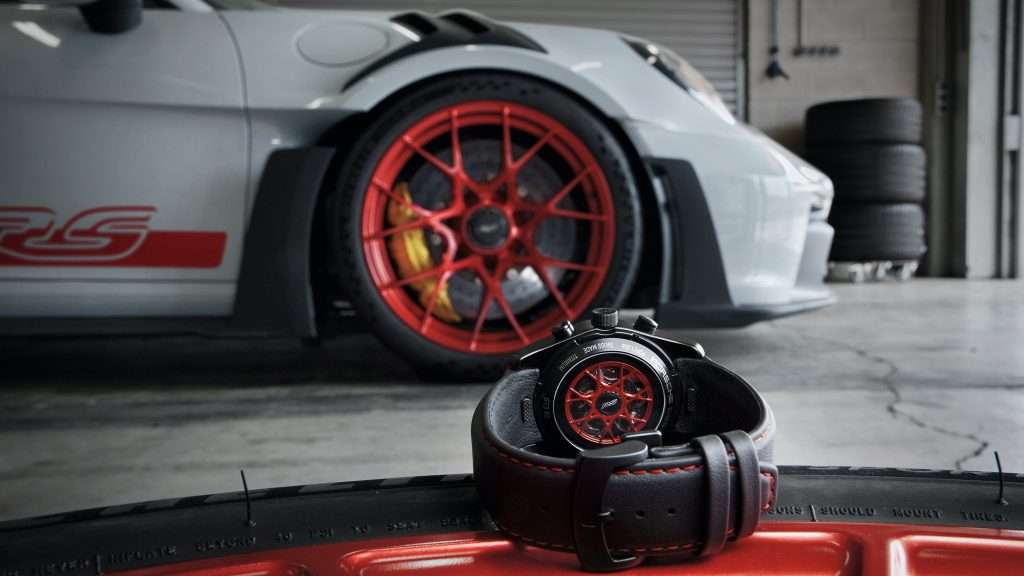 The 911 GT3 RS chronograph was created by Porsche’s in-house watchmaking facility in Solothurn, Switzerland, and was inspired by the mindset of motorsport, where extreme precision is crucial. The only people who can purchase this mechanical watch are the car’s owners. Its foundation is a glass-bead blasted case with a screw-down crown made of either natural or black titanium. The genuine Porsche Design chronograph caliber WERK 01.200, which has received COSC certification for its exceptional accuracy, is housed inside the watch.

The second hand can be started, stopped, and reset all at once thanks to the flyback function of the watch. This chronograph is more than simply a timepiece, as seen by the “Start/Stop” and “Next Lap” laser engraved on the chronograph pushers. There are numerous design elements and materials from the GT3 RS in addition to improvements like the pulsometer scale on the bezel.