The 2021 Honda Civic Type R is a hatchback that’s built for racing. It has a zippy, turbocharged engine and plenty of aerodynamic enhancements. Critics will balk at its garish Fast and Furious appeal, but only a fool would easily pass up so many standard safety and tech features. You don’t have to build this Honda race car in your garage to get 300 horsepower.

Have you ever stopped at a traffic light and heard a droning four-cylinder engine revving that can only be an old modified Honda Civic? It’s got an aftermarket turbo, VTEC controller, and body kit crawling up to the line next to you. Then, you look over to see a teenager in a ball cap giving you a head nod and yet another annoying rev of his barely legal powertrain.

Well, the 2021 Honda Civic Type R is the grown-up version of that image. It’s a sporty little race car for people who don’t have time to build one in their garage. This year, the Honda Civic Type R sheds some of its juvenile appeal for a more advanced list of features like driver-assisted safety, a Limited Edition model, and high-performance tires and brakes.

The 2021 Honda Civic Type R has two model trims – the base model and a Limited Edition. Both come with a six-speed manual gearbox that puts the fun of driving fully in your capable hands. You’ve got a 2.0 Liter turbocharged and an intercooled VTEC engine at your disposal. That’s right. It’s already been modified by Honda engineers so that you don’t have to do it yourself. The 2021 Honda Civic Type R delivers 295-pound feet of torque and produces 306 horsepower straight off the lot.

Just in case you didn’t know, Honda is famous for its VTEC engines. VTEC stands for Variable Valve Timing and Lift Electronic Control. VTEC systems put out high performance in the high RPM range and let you conserve fuel at low RPMs. Some Honda enthusiasts equip their vehicles with aftermarket VTEC controllers to boost their efficiency, but with the 2021 Honda Civic Type R that’s totally unnecessary.

The Civic Type R has Brembo aluminum front brake calipers and improved power-assisted rear brakes. The chassis is made of lightweight steel and the Type R’s hood is made of aluminum. So, it skips across the road to boost its speed and if you want further weight reduction, just look to the Limited Edition model. It’s managed to shave 46 pounds off the body.

The Limited Edition goes even further to boost performance by incorporating Michelin Pilot Sport Cup 2 tires and BBS aluminum wheels. The Limited Edition also has enhanced dampers and sport-tuned steering. It might save a few seconds on your lap time, but it doesn’t upgrade the powertrain or transmission.

It’s just built for weekend jaunts on a curvy racetrack or detours on a long, winding road. It’s a fully functional racecar. The Type R comes with a data-tracking app called Honda LogR that you access from the center console display. You have access to your racing data in real-time with the app.

There are 3 driving modes. You can toggle between normal, comfort, and +R Mode. This automatically tightens the steering response, reprograms the throttle, and optimizes your suspension for peak performance. Just be advised that +R mode will tax your fuel economy. Speaking of fuel economy, it’s surprisingly decent for a sports car. The 2021 Civic Type R gets 28 miles per gallon in the city and 22 MPG on the highway.

At first glance, you might look at the Civic Type R’s body design and think that it’s all for style points. After all, it’s got three exhaust ports. Well, you couldn’t be further from the truth; it’s really all about aerodynamics and performance.

In the rear, the Type R Civic has a high wing spoiler and an air diffuser over the hatch. These create downforce and help the Civic maintain control at high speeds. The roof has finlike attachments called vortex generators that help to funnel air toward the rear diffuser and wing. Toward the front of the Civic, there are underbelly spoilers, a hood scoop, and front fender air vents for engine cooling. 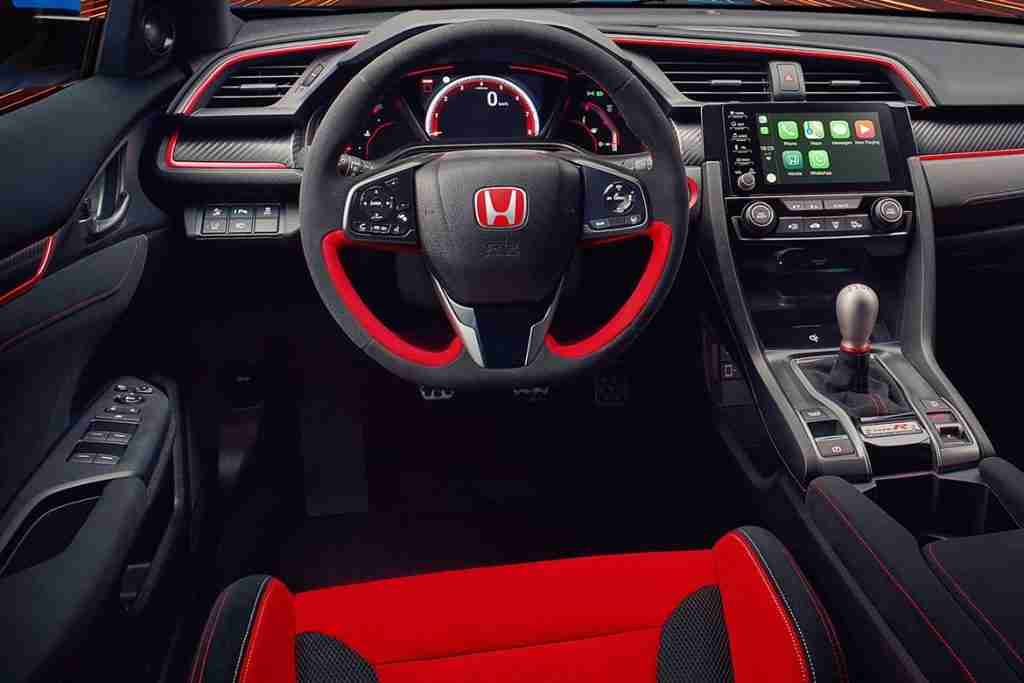 Technology isn’t the strong suit of the Civic Type R, but it’s not a weakness either. There’s a single 12V outlet in the front of the interior and 2 USB ports. Apple CarPlay and Android Auto compatibility are standard features for the 2021 Civic Type R. However, accessing those apps are frustrating on the 7-inch touchscreen display. One of the most impressive tech features for the interior is the standard navigation system with voice controls. Sometimes that might cost you extra, and it’s a nice touch to have satellite-linked navigation without ordering an additional package.

Four people can fit comfortably in the new Civic. There are 97 total cubic feet of passenger volume. It has high bolstered sport seats in the front, but only in one style. It’s red on black for everyone. People riding in the front seats get 42.3 inches of legroom. Fold the rear seats down and you’ve got 46.2 cubic feet of cargo space.

The steering wheel is wrapped in Alcantara. That’s the same material that Aston Martin uses as a headliner for their swanky DBX crossover. The steering wheel has illuminated controls, so you don’t need to take your hands off the wheel as much. Sport pedals match the aluminum shifting knob. Just be careful when parking out in the sun, because you might come back to a blazing hot ball of metal in your center console.

If you love modified Civics, then you’ll love the instrument panel of the 2021 Type R. It has a G-force gauge, compass, boost gauge, lap timer, digital speedometer, and other vital stats for your car. You can also customize certain aspects of the display so that you see only what you want to see.

How Safe is the New Civic Type R?

As mentioned earlier, the 2021 Honda Civic Type R prioritized driver-assisted technology this time around. It comes with lane-keeping assist, adaptive cruise control, and auto high-beam headlights. It also has road departure mitigation and collision mitigation braking. It will be interesting to see how many racers try to disengage these safety features for better performance.

In addition to the Honda Sensing Suite, the 2021 Type R also has enhanced traction control, a full complement of advanced airbags, and a rearview camera. You don’t need to pay extra for these safety features and that is a huge plus for this vehicle. Just jump the lot to Acura and you’ll find these same safety features bundled into a package deal that adds thousands to your initial cost.

4 Questions to Ask When Buying a New Car

The 2021 Honda Civic has a surprisingly comprehensive list of safety gear and it all comes standard. You get passive, active and driver assistance features without the pricey add-on packages. The Limited Edition gets a bright yellow color swap and even better handling but doesn’t improve overall power. For nearly 10 grand more, it hardly seems worth it.

When it comes to technology that doesn’t relate to performance, the 2021 Civic Type R loses power, too. It has a 7-inch screen and lacks any options to upgrade tech amenities. Thankfully, it does have a premium audio system and standard navigation.

That lack of options is echoed at nearly every level with the Type R. You get exclusively designed sport seats, a single body kit design, and a suped-up powertrain. Basically, they’ve kitted out a Honda Civic for you and that’s that. This could frustrate some auto enthusiasts who like the idea of modifying nearly every aspect of their Honda Civic. However, Honda automakers don’t hide this fact. It’s like there’s a sign posted at the entry that says – this vehicle is ready already and there’s no need to tweak it further. If you accept that fact, then you’re sure to have a lot of fun in the 2021 Honda Civic Type R.

The 2021 Honda Civic Type R has an MSRP (Manufacturer’s Suggested Retail Price) of $37,495. That’s not bad considering that you don’t need to spend thousands of dollars on aftermarket parts. Otherwise, the pricey Limited Edition is skippable. You’re in good hands with the base model and all its amazing standard features. This is the perfect sports car for people who enjoy the thrill of racing but never quite figured out what all that stuff is under the hood.