The GReddy Fugu Z first made headlines after debuting at SEMA in 2015. It won Best in Show in the Gran Turismo Awards and was easily the crowd favorite. That’s how the custom-built Datsun Z made its way into the Gran Turismo Sport video game.

There’s just something about this custom build that inspired people and helped to cement the modified Datsun Z as an automotive legend. But why the name – Fugu Z? Well, the name Fugu relates to the Japanese pufferfish.

Would you eat a fish that was poisonous and could possibly kill you? Well, the Japanese pufferfish makes for an adventurous and possibly fatal culinary experience and that’s the inspiration for the GReddy Fugu Z’s name.

In an interview with AutoBlog, Sung Kang gave some insights into the early stages of the Fugu Z build. “I remembered having dinner with Sonny Chiba in Japan while filming Tokyo Drift. We were having fugu, Japanese for blowfish and Chiba explained that if the poisonous fish wasn’t properly prepared, it could kill you – a parallel I saw with a car built for the track.”

As you know, we love custom builds here at Build Your Own. So, we decided to look back at the evolution of the GReddy Fugu Z and give our audience a detailed review of its performance specifications.

History of the GReddy Fugu Z

It all began with a movie star’s dream. Sung Kang is an American actor most known for his role as Han in the Fast & the Furious films. The Fugu Z is Sung Kang’s international social media car. What started out as casual musings with friends quickly snowballed into a social media-fueled quest to make a dream car come true.

Sung Kang found the old 1973 Datsun on Craigslist and drove it home himself. After posting his thoughts on Facebook about a possible body kit for the Datsun, fans and automotive enthusiasts shared their ideas, too. 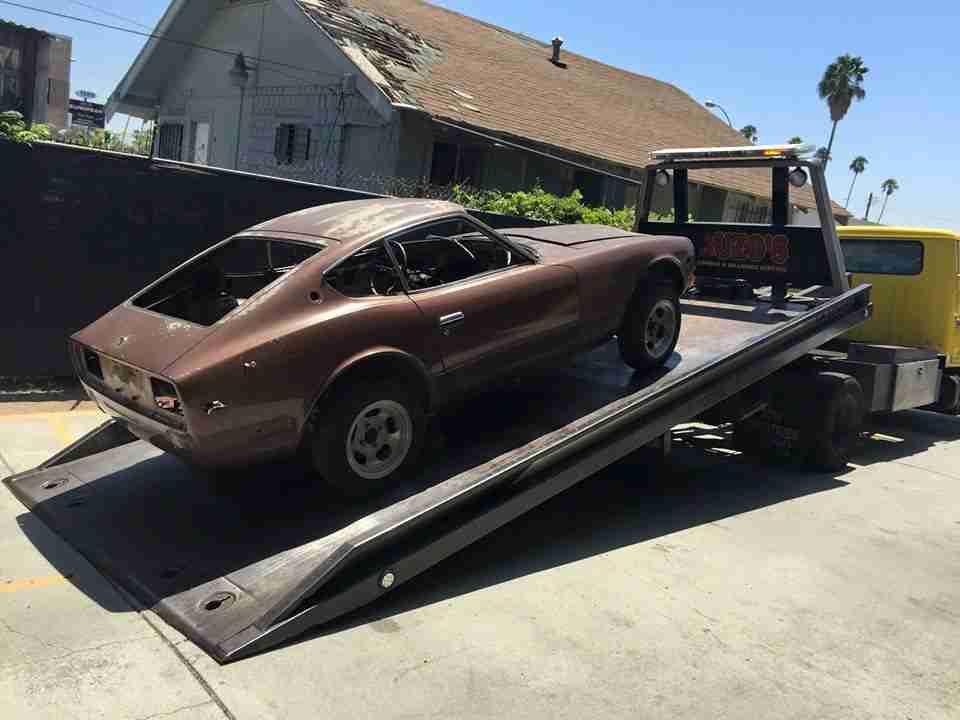 Eventually, GReddy reached out to Kang and got involved in the build. WithGReddy at the helm, there was nothing out of reach as far as this vehicle’s performance and design potential. People from all over the world collaborated on the design and it quickly took on a life of its own. The world was anxious to see the results and SEMA was chosen as the best venue for Fugu Z’s debut.

Even Sung Kang himself never imagined that his dream car build would debut at one of the world’s biggest auto shows. The team had just 3 months to get their car ready. Kang was personally invested in the build and hovered over the mechanics even down to the last hour before the Fugu Z debuted at SEMA.

It was a huge hit. According to market statistics from Hagerty, the asking price for used 240Zs in pristine condition shot up by 30% after the Fugu Z debuted at SEMA in 2015. The custom-built Datsun Z also found its way into the Gran Turismo video game. 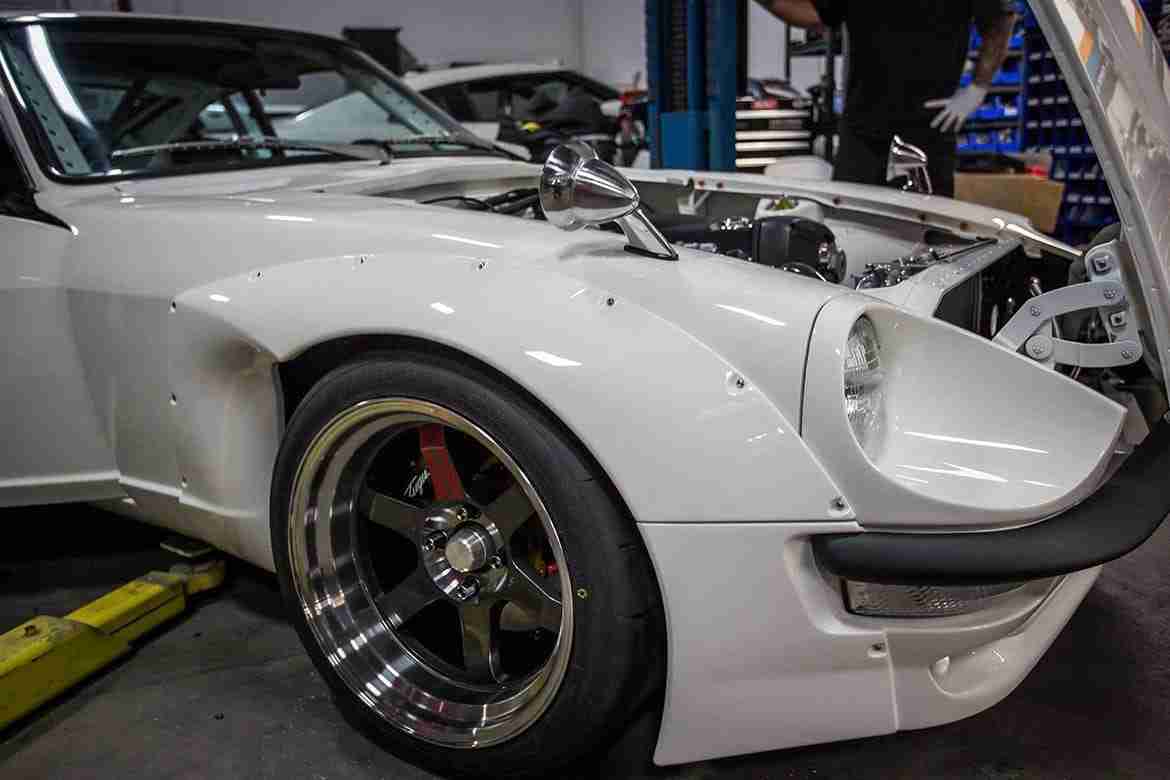 The GReddy Fugu Z has distinctive exterior features based on a Japanese Rocket Bunny body kit and its original 1973 Datsun body style. It has a lowered suspension with wide, flared-out fenders and a signature front bumper and rear spoiler. It took the team over 60 hours to complete the stitch welding.

The factory 904 paint code hovers somewhere between off-white and bone. It comes from a classic Datsun color choice – Kilimanjaro White. The Fugu Z has custom-sized 17-inch Volk Racing alloy wheels with Nitto NT01 tires and the over-sized brake calipers have Fugu Z etched directly onto them.

The Fugu Z has a custom-built roll cage to reinforce the frame. The interior also underwent weight reduction customizations. The GReddy team stripped it down to the bones with custom seats, dashboard console, and doors made of carbon fiber. Overall, the Fugu Z weighs just 2,400 pounds.

The front seats are mounted low to the body and have Fugu Z stitching. There’s nothing but a metal frame in the back. Without any sound dampening material, the Fugu Z’s HyTech headers, GReddy exhaust, and lack of windows on the front doors make for a noisome driving experience. 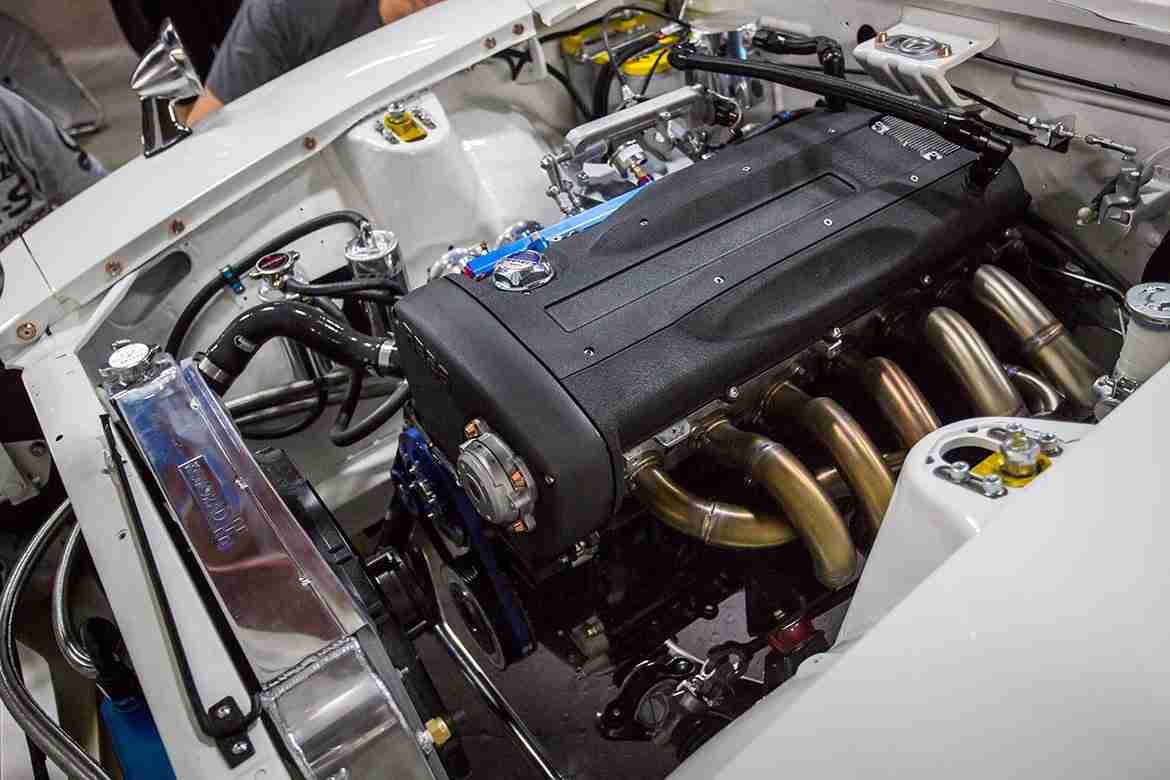 The GReddy Fugu Z has a base platform from the 1973 S30 Datsun Z that Sung Kang bought. For the sake of comparison, it’s important to note that the base model S30 Series Datsun produced between 138 and 151 horsepower. It had a 4-speed manual gearbox and a 2.4 Liter naturally aspirated inline 6.

The Fugu Z has a 1994 2.6L RB26 Nissan Skyline GTR engine that has been converted over to natural aspiration with custom tuning. The inline-6 RB26DETT engine needed to be decommissioned as a turbo-charged motor. That was no easy feat for GReddy. It required modifying the cams, building a custom exhaust manifold, new pistons, valves, and throttle bodies. They raised the compression rate from 8.5:1 to 12:1. That gave the Fugu Z a power range between 215 and 295 horsepower. For the vehicle’s size, that’s a ton of power supplied to the rear wheels.

The Fugu Z has a 5-speed manual transmission from the Nissan Skyline RB25. The car got an OS Giken twin-plate clutch, flywheel, and limited-slip differential to go along with it. The team added on a McKinney Motorsports driveshaft and transmission kit, custom Techno Toy Tuning CV axles, and R200 rear-end conversion. There’s no power steering on the Fugu Z. So, powering through corners and turns can provide a potential workout for your arms. It’s definitely a driver’s car.

You can find the GReddy Fugu Z in Gran Turismo Sport among all the GT Awards winners. If you want to try out the GT Sport GReddy Fugu Z on Gran Turismo, you can purchase the vehicle on the PlayStation Store for about $2.00. Follow the link for details. You can also find the custom-built Fugu Z on the Gran Turismo section of Brand Central for 300,000 Credits.

Build Your Own took the Fugu Z around the Mount Panorama circuit for 3 laps. To see our Gran Turismo action, check out the video below.

What Ever Happened to the GReddy Fugu Z?

In 2020, Sung Kang brought the Fugu Z out of the GReddy garage with plans to upgrade and fix many of the features that were rushed to get the custom modified Datsun Z ready for SEMA back in 2015. The Fugu Z now has a custom steering wheel and safer seats, but there are rumors of a twin-turbo mod in the vehicle’s future.