Love it or hate it, the Urus has become Lamborghini’s most popular model. This year, the Italian automaker produced their 15,000th Urus SUV. Why do people like it so much? The Lamborghini Urus is a rather schizophrenic vehicle. On one hand, it’s brutally powerful and fast. On the other hand, it’s luxurious and spacious. It’s a supercar pretending to be a daily driver and that’s quite a feat to pull off.

In a company press release, Lamborghini’s CEO Stefano Domenicali lauded that “The Lamborghini Urus is a visionary approach based on the infusion of Lamborghini DNA into the most versatile vehicle, the SUV. The Urus elevates the SUV to a level not previously possible, the Super SUV. It is a true Lamborghini in terms of design, performance, driving dynamics, and emotion as well as drivable every day in a range of environments,” said the Automobili Lamborghini Chairman.

The exterior design of the Urus SUV isn’t very distinctive. It has many of the same proportions as the Audi Q7. After all, both the Q7 and the Urus come from the Volkswagen Group. However, the Lamborghini Urus manages to cut its own cloth in several different ways.

For starters, the Urus has the best weight-to-power ratio in its class. For as much technology that the Volkswagen Group threw at the Urus, it’s not the heaviest super SUV on the market at 4,847 pounds. The Porsche Cayenne Turbo GT weighs 5,000 lbs. and the Bentley Bentayga weighs 5,324 lbs.

The Urus just looks heavy. The front of the Urus SUV has a grille that adds character to the vehicle. It has large slats on the sides of the nose that taper to a thin line in the middle. The hood has distinctive Lamborghini bodywork and styling. The profile has sharp angles and hexagonal symmetry that resembles other supercars in the Lamborghini stable. The roof sweeps down in a coupe-like fashion. The rear has quad exhaust ports, wraparound taillights, and a rather blunted tail end.

Performance Specs for the Lamborghini Urus 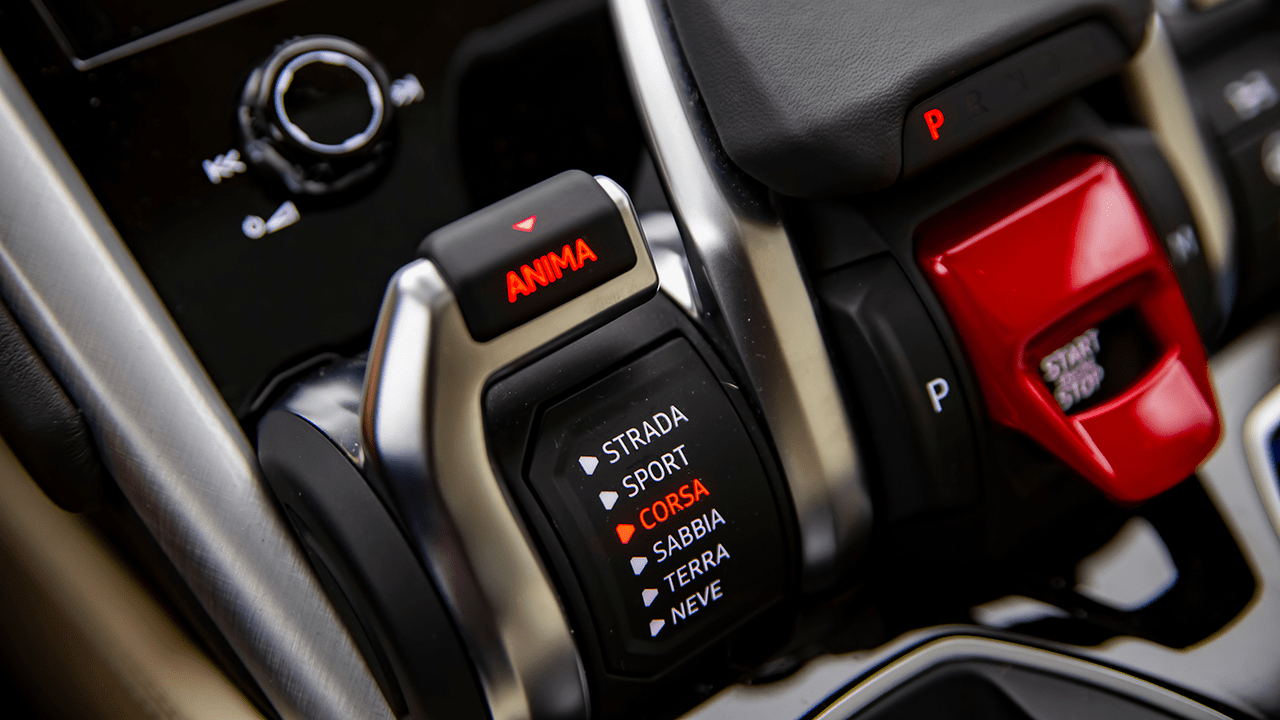 The beating heart of the Urus is a twin-turbo 4.0 Liter V8 engine. It produces 650 horsepower and maxes out at 6,800 RPMs. Now, that’s relatively tame for a Lamborghini. You’ll still enjoy a loud, distinct exhaust note, but don’t expect that many shrieks and pops. It’s a subdued Lambo, but it can still blow the doors off the competition. This SUV also has access to 850 Nm of torque that is mostly supplied to the rear wheels. The Urus travels from zero to 60 MPH in 3 seconds flat and reaches a top speed of 189 miles per hour.

The Urus employs an 8-speed automatic transmission and permanent all-wheel drive. The stability and all-wheel drive capabilities of the Urus are top-notch. It comes with active torque vectoring and four-wheel steering. Each wheel can steer independently for enhanced stability.

There are seven driving modes. You can find the ANIMA handle inside the cockpit. It’s a manual control that toggles through strada, sport, corsa, sabbia, terra, neve, and ego modes. Strada mode is for daily drives and Corsa is for maximum performance. If roads are slippery, you can choose Neve. The Ego mode allows the driver to customize the traction, suspension, and steering to their own specifications.

The Cockpit of the Urus 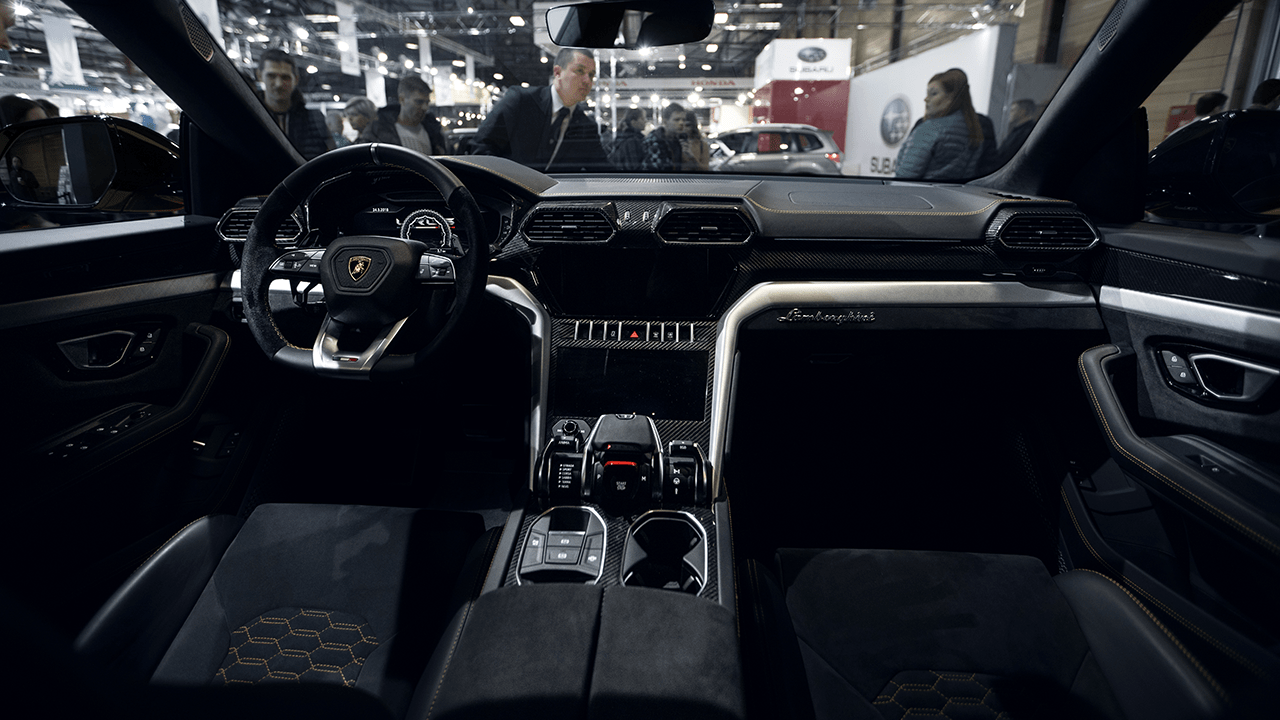 The interior of the Urus is dominated by the center stack. It’s a delightful mix of tactile controls and touchscreen displays. Marty McFly would feel at home inside the Urus, but this SUV doesn’t need to get back to the future. It’s doing just fine as the premiere SUV supercar of the moment.

There are two main touchscreen displays. Both deliver haptic feedback when you key in different functions and settings. The menu buttons are oversized and easy to read. There’s a 21 speaker Bang & Olufsen sound system on board and the Urus also has voice recognition software.

The Urus is shockingly spacious. There are 21.75 cubic feet of cargo space and two different seating configurations. With bucket seats, the Urus fits four passengers. With a rear bench, it fits five. The materials are upscale and diverse. You can configure a Lamborghini Urus with your choice of carbon fiber, leather, wood inlays, and Alcantara.

Is it Safe to Drive a Lamborghini Urus? 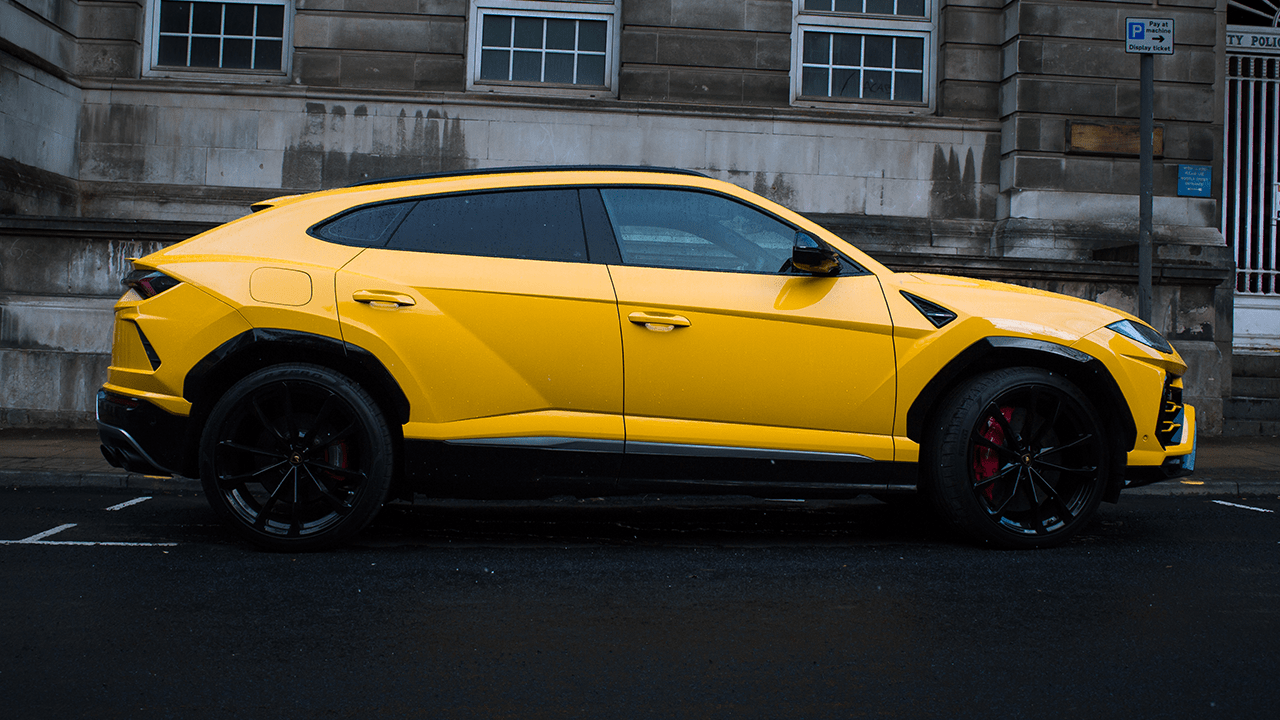 Russian driver Andrey Leontyev spoke about the Urus after setting a new high-speed record across the ice, Leontyev had this to say in a press interview about the Lamborghini Urus. “I am certain that even a fairly inexperienced driver could still perform well in this vehicle if they were to step onto the racetrack. But that same person would also be able to drive the car to their summer home or to the countryside with friends.”

The Lamborghini Urus has 40-millimeter-thick carbon-ceramic brakes in the front and 30 mm thick brakes in the rear. It can go from 62 MPH to a full stop after about 37 meters. There’s adaptive air suspension onboard and the Urus has active roll stabilization technology.

As a member of the Volkswagen Group, this SUV has all the latest safety technology on its options list. Owners can choose from a number of advanced safety features in three different packages. They’re called ADAS or advanced driver assistance systems. You can equip the Urus with blind-spot detection, rear cross-traffic alerts, self-parking, and more.

Final Lap in the Urus

The Lamborghini Urus is popping up in suburbs all across America but that doesn’t mean it’s not a supercar. It has a powerful twin-turbo V8 engine, advanced racing technology, and the look of a Lamborghini. The Urus also has a supercar price tag. It carries an MSRP of $218,009.

The Urus is faster than the Bentley Bentayga and the Cayenne Turbo GT from Porsche. If you want to feel the thrill of having your back pressed in the seat every time you get behind the wheel, then the Urus could be your daily driver. It does have all the safety and tech features that motorists want from an SUV. Those features are just wrapped in a hulking, neon, fire-spitting frame.

Your Engine is Overheating – Is There Anything You Can Do?