Here’s a beautiful example of a lowered GMT400 built by a guy called Zip. It’s a 1988 Chevy Silverado Stepside (officially called Sportside) with 210,000 miles on the stock 5.0L 305 V8 that he paid $1,100 for. It was a good clean, largely rust-free truck that had been carefully maintained and had spent its life commuting a little more than 100 miles each day. Zip said that it simply needed new tires and front brake pads. Other than that, everything was fine. He gave it a complete service and drove it for a couple of months to iron out any problems.

Chevy trucks were completely redesigned in 1988. Power steering, power brakes, and a 5-speed manual gearbox were all standard features. Plus, a new rear-wheel anti-lock braking system, better corrosion resistance, an aggressive but attractive look, and all the sturdiness and dependability you expect from a Chevy truck. 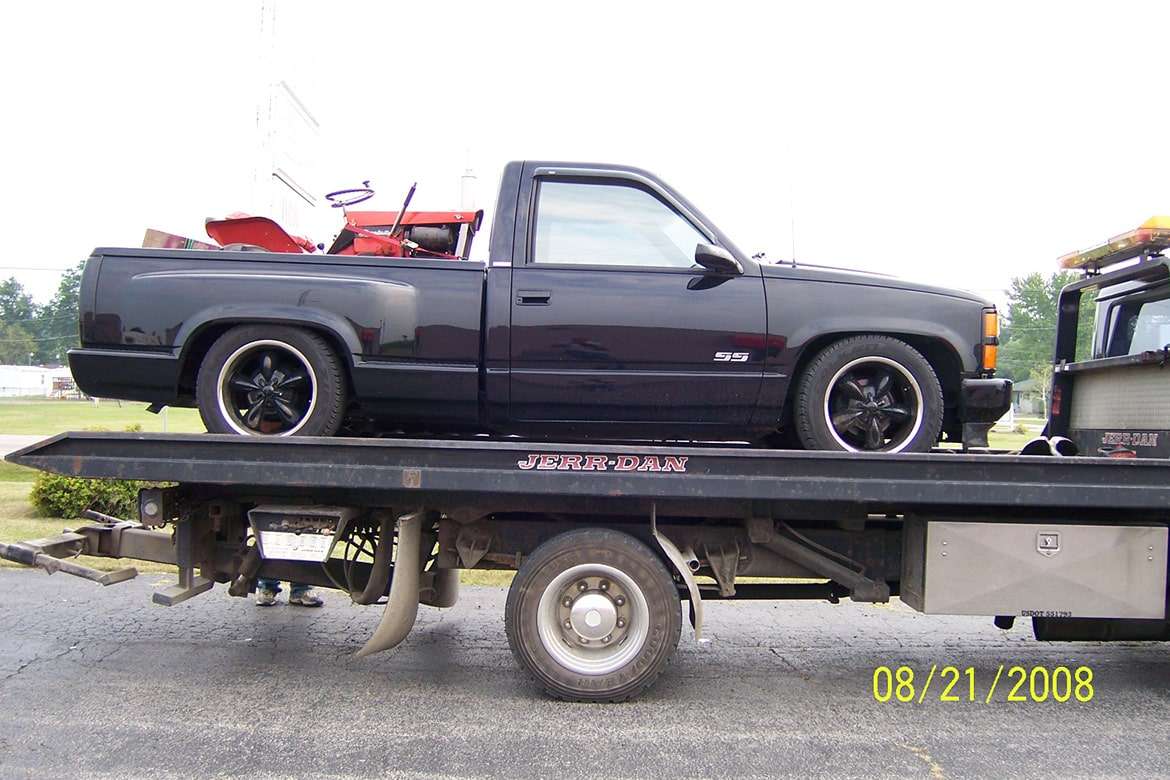 Originally painted burgundy from the factory, Zip had grandiose plans for this ’88 Silverado Sportside commuter, as it was bought to customize and enter into shows. There were 10 standard paint colors for 1988: sable black, adobe gold, iced blue, pacific blue, spice brown, summit white, sandstone, flame red, Brandywine, and quicksilver. The Sportside was just one of the eight chassis-cab models available back in 1988. The Sportside was available on the C/K1500 series only and in a short wheelbase with a 6.5-ft. box.

This 1988 Chevy Silverado Stepside had a full cosmetic restoration along with an all-steel Goodmark 2″ cowl hood and aftermarket mirrors added while Zip sourced all the desired suspension parts and ordered all of the electronics he planned to install. The seat was sent out to his Upholster to be refinished. The upholstery was done in Fawn leather and Ostrich leather. Zip also had them emboss the iconic SS insignia on the seatbacks.

In 1988, a new high-tech seat construction was introduced. Silverado’s new-formed seat construction- was a one-step fabrication process. The frame, foam cushion, and seat trim are actually bonded together under heat. Since excess fabric and internal fasteners are eliminated, the seats were supposed to prevent bunch up or sag. This was only available in the custom cloth trim. 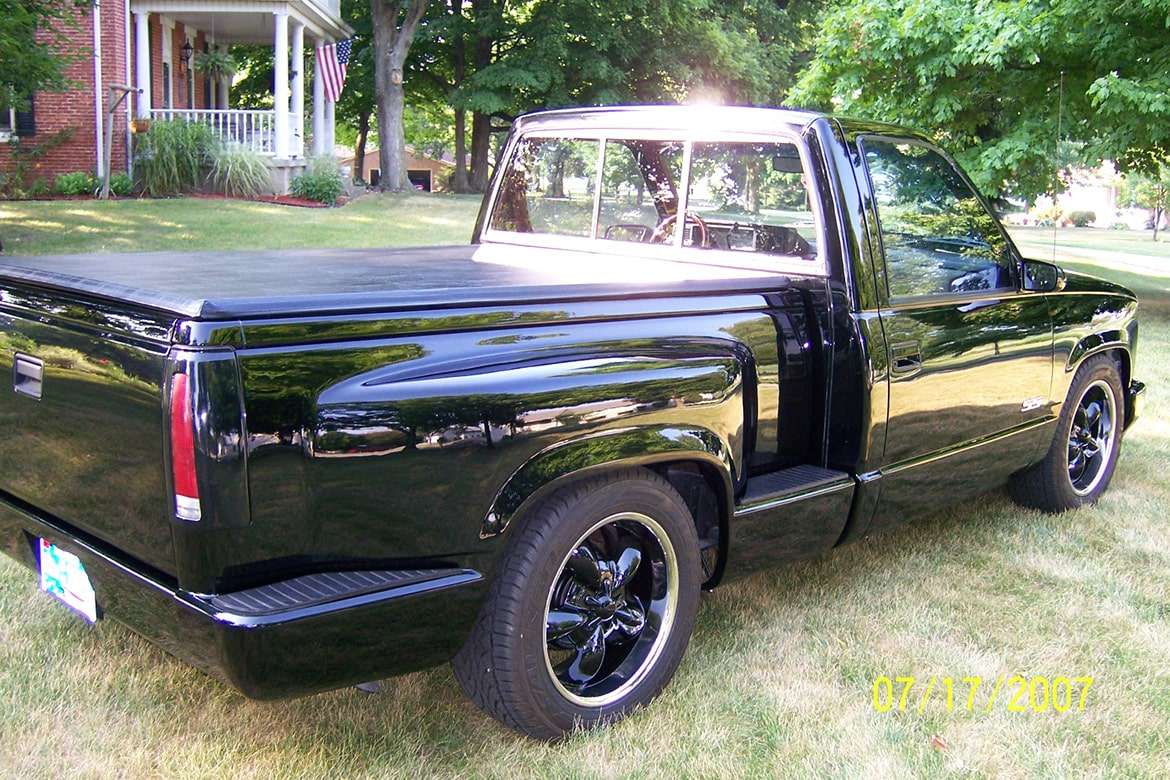 Zip decided to go with a 4″-6″ drop with C-notch in the frame. So he ordered the lowering kit from LMC and Summit which included 2″ drop spindles, Eibach lowering springs, and Bilstein shocks for all 4 corners and the appropriate A-Arms.

The rear lowering kit consisted of C notch plates, axle flip kit, and pinion angle blocks. He then ordered a smooth rear roll pan and front bumper and took those to the painter. When the truck came back he worked for about 6 weeks on the lowering kit in his spare time. To finish off the look Zip ordered a set of KMC SS 8×18 with Falken rubber to replace the factory rallies and Uniroyal tires.

All told, with the bodywork, lowering components, bumper, roll pan, wheels, bench seat, electronic additions (which I’ll get to shortly), and lastly a trailer hitch that was hidden behind the license plate to which he went to the junkyard and got a flip-up license plate bracket from an old Monte Carlo, etc., Zip had right around $14,000 in the truck.

The majority of parts were purchased either using LMC and/or Summit Racing. Nothing was done to the drivetrain, it was a shower, not a goer. This lowered GMT400 did have a cat delete and ran true duals through Flowmaster with angled dumps just behind the back wheels.

This 1988 Silverado had the stock 5.0L 305 V8. This engine featured swirl-port fuel induction, electronic fuel injection, and eight big cylinders. With electronic spark control to help eliminate spark knock and a high 9.3:1 compression ratio, this engine made 175 horsepower and 270 lb.-ft. torque. The 305 was optional in 1500 and 2500 GMT400 trucks.

Notes From Zip: The fuel pump decided to go out. More to the story can be seen in the above video. You’ll see the trademark valve seal oil blowby when the engine is revved. There is damage to the truck caused by a tree that fell across both my 1987 Chevrolet S-10 and 1988 Silverado. The S-10 broke the trees fall and was considered totaled by my Insurance, so I didn’t make a claim to it, but I did make the claim on the Silverado which they tried to Total it as well, but after showing them the receipts for all the work, they sent out a specialty vehicle appraiser and he valued the truck at $16,000 at the time. The Insurance paid without totaling the truck. I should mention I got the truck back in July and the tree fell on the trucks a short time later in October…..so yeah….that one hurt.
chevrolettruckzip
0 comment 6 FacebookTwitterPinterestTumblrRedditWhatsappEmail
previous post

How to Tell if You Need a Wheel Alignment or Balancing