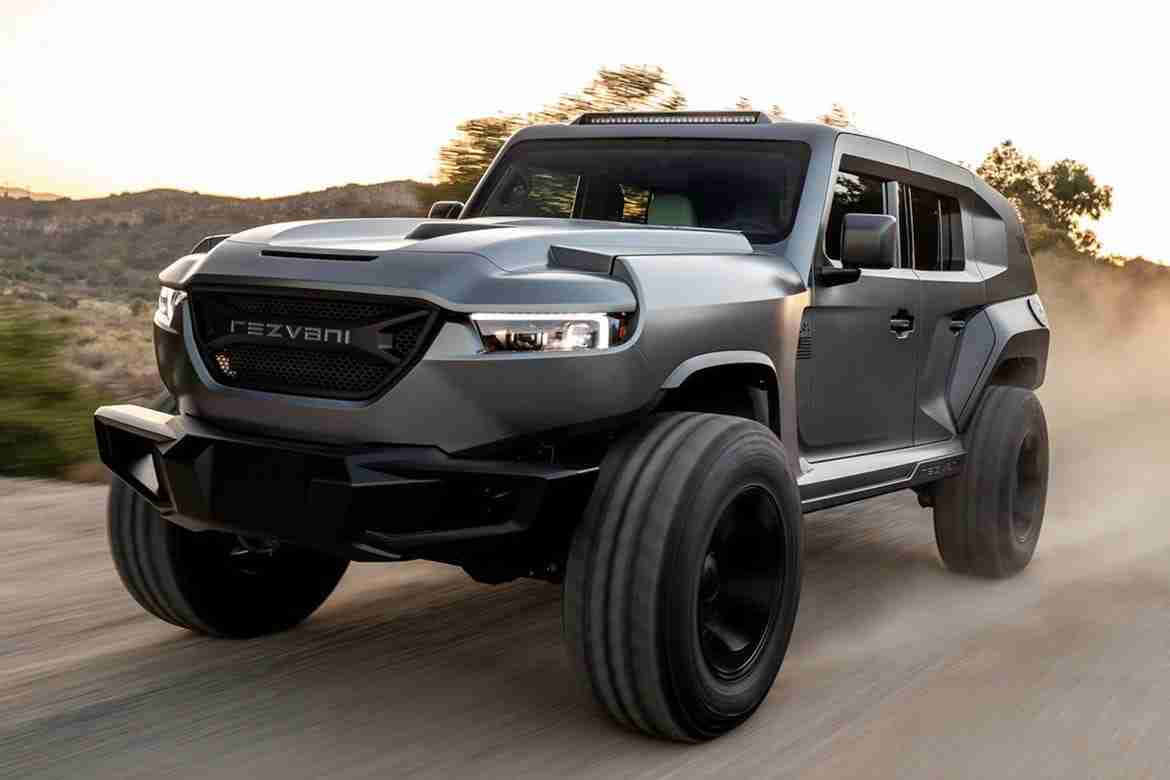 Whether you’re gearing up for the zombie apocalypse or just want the biggest, baddest vehicle on the market, the Rezvani Tank stands out as one of the most extreme vehicles that money can buy. The list of options reads like a video game walkthrough as you choose your weapons and special items. All jokes aside, the Rezvani Tank can be outfitted with smoke screens, blinding lights and electrified door handles.

It’s a tactical urban vehicle or TUV. The Tank looks like an off-roading SUV but packs way more capability and utility under its skin. The exterior is rough and rugged. The interior is downright luxurious. Park it next to your Tesla Cybertruck and you’ll be all set for urban decay in the not-so-distant cyberpunk future.

There are three model variants. The base model Tank comes with off-road wheels and tires, thermal and night vision cameras, and a powerful V8 engine from Dodge. The next step up is the Tank X which swaps out the conventional V8 Dodge engine for the same supercharged V8 engine that’s in the Dodge Demon. Lastly, there’s the Military Edition. It comes with a wide variety of features, both offensive and defensive. It’s perfect for Bond villains or Alpha-type servicemen who have a big budget and don’t care about getting noticed wherever they go.

More about the Military Edition

There’s a sizable market for the Rezvani Tank to government and military personnel. The Military Edition provides nearly everything a special agent would want on a vehicle. It has bulletproofed paneling and glass, night vision and thermal imaging, blinding lights and smoke screens, and it’s even got an EMP protection system. Yeah, that’s right. The Tank protects its occupants and internal circuitry from electromagnetic pulses. It’s listed under accessories but carries an added price tag of $2,500. This isn’t a gag. There’s some serious functionality here that a military service person would want and need. You could have underside explosive protection, an auxiliary gas tank, stow-and-go gas masks, and military-grade run-flat tires. Even civilians might ask for a few of these handy upgrades.

The Rezvani Tank has a 6.4 Liter V8 engine that produces 500 horsepower. It’s an SRT motor from Dodge. There are several engine configurations you can choose from once you get into the build process. Each Rezvani Tank is essentially a custom order, so you can swap out the motors from the start.

There’s a 3.6 Liter V6 that’s available but equipping this engine would be like taking the muscle out of the Tank’s legs. There’s an unleaded and a diesel version of this engine configuration, but why bother? You’ll simply want to do more than that engine can muster. Maybe this model is just for the showroom floor or performances that don’t require real power.

The upgraded Tank gets the 1,000 horsepower supercharged 6.2 Liter V8 engine. That’s enough force to pound through snowdrifts, rivers, steep hills, and push through hordes if necessary. The SRT engine isn’t lacking any power to propel the beast, but a 1,000 horsepower demon engine is just icing on the cake.

You can choose between an 8-speed automatic or a 6-speed manual gearbox at no additional cost. Experienced off-roaders might leap for joy at the prospect of having a manual, especially when most new SUVs like the Land Rover Defender are getting rid of manual transmissions.

The Tank comes with FOX shocks with a 4-inch lift kit, but you can upgrade them to a high-performance 6-inch lift kit for an additional cost. You’d also want to upgrade the brakes to the 8 piston caliper with 16-inch rotors. If you want to take the Tank off-road or task it with next-level utility, then you’d better give it every tool in the toolbelt.

This beast is capable of towing, even though it has such a small footprint. It is technically a Jeep after all. You would need to upgrade the build with a tow package though. You can toggle between all-wheel and rear-wheel drive. That’s quite a nice performance touch, again, thanks to the Tank’s Jeep guts.

Unfortunately, Rezvani doesn’t list the typical performance numbers like top speed and towing capacity. So, there’s a bit of ambiguity centering around the Tank’s true capabilities. For best results, you’d better treat it like a piece of military equipment – test it and test it again.

The interior of the Rezvani Tank is quite interesting. It’s a bit on the small side given that it’s based on the Jeep four-door Wrangler. Yet, you won’t find a safe in the center console of any Jeep. Cloth seats are standard, but you can upgrade the cabin with heated, embroidered Nappa leather seats and an Alcantara headliner. You can choose black, white, camel brown, red, or even create a custom color. You can customize the seat designs even further with stylish patterns that look like superhero armor and have names like Gladiatore and Elegante.

The instrument cluster has mostly analog gauges with a digital navigation screen in the center. You can choose the backlighting color, but you can’t customize what information is displayed there. It would have been nice to see a heads-up display in the features list, especially since this vehicle is marketed at military and off-road types.

The rear window has decent visibility unless you equip it with bulletproof glass. Then, you’ll see your reflection more than actual objects on your six. Luckily, there is a large 7-inch center screen for the rearview camera.

That center touchscreen display isn’t just for tactical operations on the way to the supermarket. It’s got Apple CarPlay and Android Auto compatibility, putting your digital life within reach while you ride. Add a premium JL audio sound system with two subwoofers and six speakers and you’ve got a high-tech SUV that could rival any premium crossover. Clearly, no stone was left unturned in presenting the Tank to market. In the near future, there might even be a mass-market version of the Rezvani Tank.

Final Words about the Rezvani Tank

Rezvani has no qualms about making coach vehicles – taking parts and components from other vehicles and splicing them all together to make something different. They did it with the Rezvani Monster and now they’re doing it with the Tank. You can put FOX off-road performance suspension on the Tank. That’s the same one you’d find on a Ford F-150 Raptor truck. However, the Tank’s got a base platform from the Jeep Wrangler and a Dodge high-performance engine. You can drive this thing into your local Jeep/Dodge dealership, and they’ll have the enviable task of servicing your vehicle.

You don’t have to be a doomsday prepper to feel the allure of one of these things. Sure, the Rezvani Tank has got some unnecessary options, but it also has everything that most commercial SUVs and crossovers have, as well. It’s got a touchscreen display, leather seating, high-tech connectivity, and more. It’s a statement piece, for sure. It says – the Rezvani Tank is ready for anything. Are you?