The 2019 Ferrari 812 Superfast, is a direct replacement for the Ferrari F12berlinetta and is among the few exotic supercars still armed with a naturally aspirated V12 engine. The front-mounted 6.5L produces 789 horsepower and 529 pound-feet of torque and it weighs just 3,527 pounds. Performance is mind-boggling (0-62 in 2.9 seconds) along with the titanium exhaust note which is beautiful. Style-wise, the 2019 Ferrari 812 Superfast is a work of art.

Intensive research and development focused on harnessing Ferrari’s wealth of track-derived technology know-how have generated the Ferrari 812 Superfast, designed to provide its driver’s benchmark performance across the board and also the most riveting and rewarding driving experience possible.

The new 6.5-liter 12-cylinder engine and rear-wheel drive are mated to a 7-speed dual-clutch automated gearbox, along with trick active aerodynamics and four-wheel steering. Electrically assisted steering is integrated for the first time to the chassis and guarantee unique handling dynamics, emphasized by a variety of performance motivated interior and exterior features. ABS and traction control are paired using Ferrari’s unique stability control systems for increased defense when you’re at the limit. 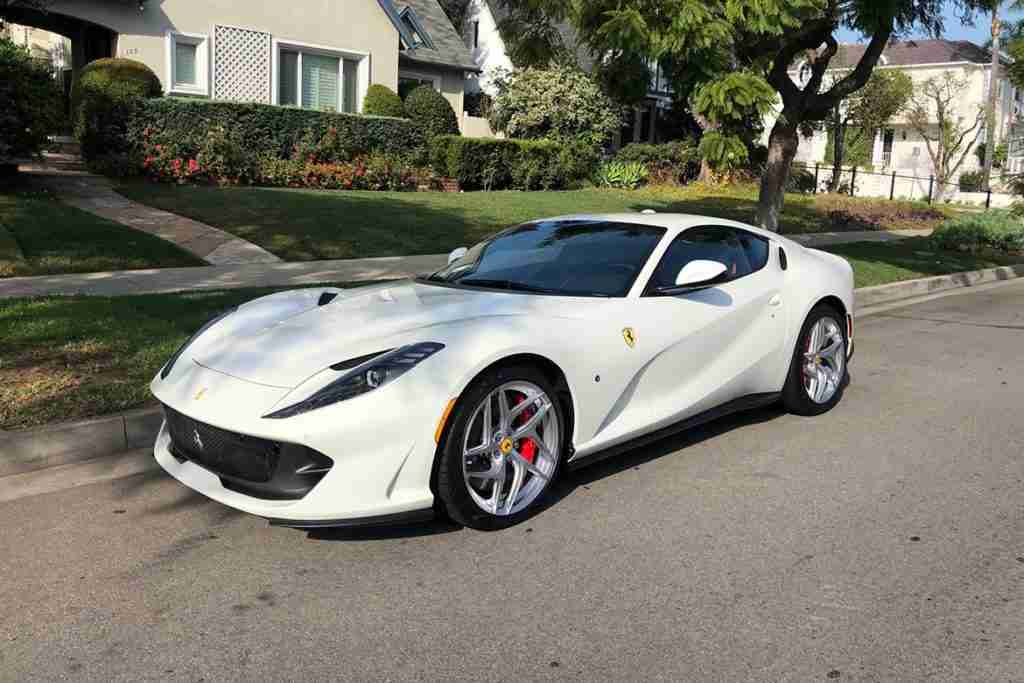 Produced at the Ferrari Styling Center at Maranello, the current Ferrari 812 Superfast redefines the front-engined V12 Ferrari proportions. It includes fastback sleekness: a two-box design with a high tail reminiscent of the glorious 365 GTB4 (Daytona) of 1969, visually lowering an aggressive rear spoiler made to guarantee downforce.

The vehicle is 183.74 inches long, 77.6 inches broad, and 50.24 inches tall, while its dry weight is 1,525 kg. The 2019 Ferrari 812 Superfast exceptionally high aerodynamic efficiency delivers a 30% increase in downforce compared its predecessors, leading to a much more exhilarating driving experience and enhanced car stability.

The interior was radically redesigned to imbue it with an even sportier personality. Light, compact volumes hug the contours of the interior structures to the extent that the latter are visible in certain places. The general effect is of thoroughbred racing eagerness and lean elegance that never feels overpowering.

The inside of the 2019 Ferrari 812 Superfast takes inspiration from both the previous F12berlinetta and the inside of this LaFerrari, particularly the shape and position of the air vents as well as the shapes of the dashboard.

Included in the Ferrari’s flagship model layout, the 812 Superfast’s center control stack continues to lack a fundamental infotainment screen featured in entry-level versions like the GTC4Lusso and Portofino, keeping only a small temperature display for the climate control system and dividing all vehicular status information shows one of the driver’s multifunction device cluster, in addition to the passenger-side touchscreen stack screen over the glove compartment area.

Despite having owned powertrain technology experience in forced induction (mainly turbocharging) and hybrid areas, Ferrari has made clear that none of these technologies are being integrated into the mythical front-engine, rear-wheel-drive, V12-engined Berlinetta layout because of heritage reasons.

The transmission for the 2019 Ferrari 812 Superfast is a dual-clutch 7-speed F1 automatic manual gearbox made for Ferrari by Getrag, depending on the gearbox used in the Ferrari 458.

The 2019 Ferrari 812 Superfast has 20-inch wheels and tires in the front and the rear. The tires are Pirelli P Zero size 275/35 ZR 20 for the front tires and 315/35 ZR 20 for the rear. The brakes are carbon-ceramic Brembo Extreme Design disk brakes, which Ferrari claims have 5.8% enhanced braking performance in comparison with the F12berlinetta. The brakes are borrowed in the Laferrari, with a diameter of 398 mm (15.7 in) in the front and 360 mm (14.2 in) in the rear.

Ferrari has said that the front-engine, rear-wheel-drive V12 vehicle system –part of their brand’s legacy –is hard to refine and has introduced various developmental challenges. As such, a mixture of complex aerodynamics technology is utilized to match the 2019 812 Superfast’s chassis control system. It includes a mixture of passive and active aerodynamics to enhance drag coefficient values within the F12berlinetta.

The front of the 2019 Ferrari 812 Superfast was made to increase downforce and contains intakes for front brake cooling, in addition to ducts to improve underbody airflow. The hood of the car also has stations to move air through the side of the vehicle for additional downforce. The rear diffuser of the 812 Superfast has flaps that may open up at high rates to further reduce drag.

Ferrari claims the 812 Superfast has a top speed of 211 mph using a 0–62 mph acceleration time of 2.9 seconds. The 812 Superfast includes a capability to weight ratio of 4.81 pounds per horsepower. The 812 Superfast is the first Ferrari armed with EPS (Electronic Power Steering). Additionally, it shares the rear-wheel-steering system (Virtual Short Wheelbase 2.0) borrowed from the limited edition F12tdf. The weight reduction of the vehicle is 47% front, 53 percent rear. The automobile has recorded a lap time of 1:21:50 around the Fiorano racetrack, 0.50 seconds behind the more track-focused F12tdf. 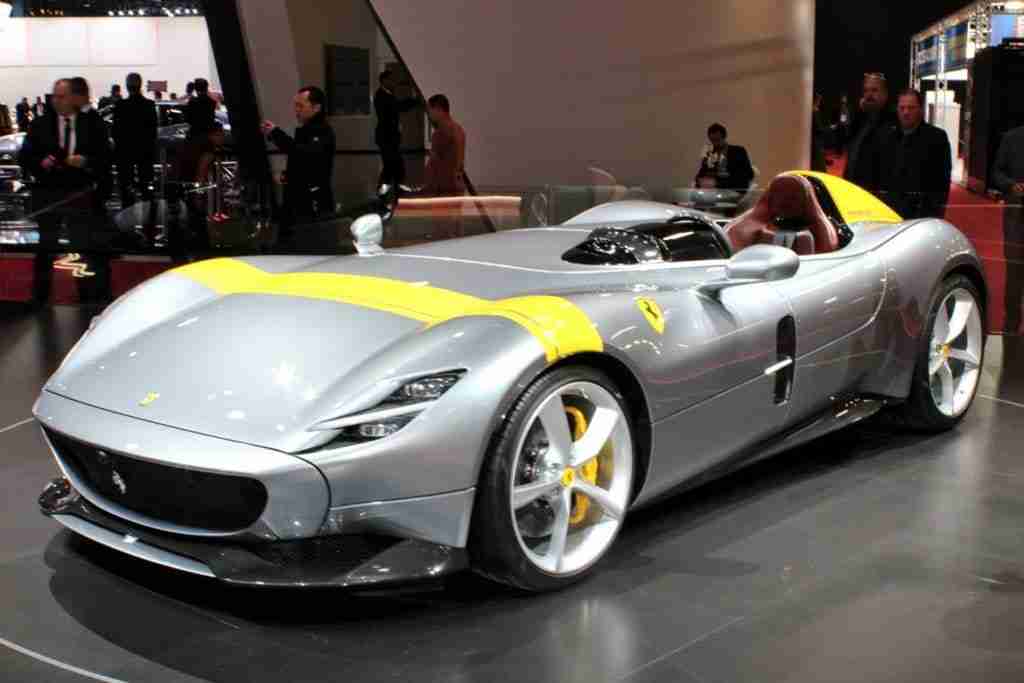 In a private event held for clients and investors at the corporation’s headquarters in Maranello, Italy on September 2018, Ferrari introduced the first two models in its modern Icona collection of models. The cars are known as the Monza SP1 and SP2 (2 and 1 denoting the seating capacity) pay homage to the iconic open-top race cars of the 1950s.

The cars are designed with inspiration taken from Ferrari’s historic race cars like the 750 Monza and are designed to provide a dedicated open-top driving experience. The vehicle is based on the 812 Superfast and uses its chassis, engine, transmission and interior elements but the motor has been tuned to generate a maximum capability output of 799 hp.

The car employs a carbon fiber construction and includes bespoke wheels and tires, interior color options, little scissor doors and a complete LED strip serving as the tail light of the automobile. The digital windshield disrupts the airflow over the driver to be able to keep maximum driving comfort. Because of the use of lightweight materials, the Monza SP weighs 3,306.9 pounds while the SP1 weighs a further 44.1 lb less as a result of the deletion of the passenger seat.

Overall production of the Monza SP will be limited to 500 units with each the units pre-sold to existing clients and with pricing set to be unveiled in the Paris Motor Show. The cars will be delivered with a distinctive racing suit and a helmet tailored for each client. The contemporary Icona series will sit over the Ferrari’s flagship V8 versions.

Unveiled in September 2019, the 812 GTS is the open-top version of this 812 Superfast. This marks the first front-engine V12 series-production convertible version provided by Ferrari in 50 years, as the convertible versions of the 550, the 575 and the 599 were limited variation models intended for special clients only.

The big rear buttresses present in the rear hold the folding hardtop roof under a tonneau cover when not in use. The electronically operated hardtop takes 14 seconds to open or close and is operable at speeds up to 28 mph.

The GTS weighs 165 pounds more than the Superfast because of chassis reinforcing parts but preserves equal performance figures as its coupe counterpart. The mechanical components such as the engine stay just like the Superfast except for the transmission that has shorter gear ratios to improve the car’s response to throttle inputs.

The engine’s high-pressure injection system reduces the number of particles which are emitted before the catalytic converter warms up. There’s also a current gas particulate filter and a stop-start system to enhance fuel economy. Other features shared with the Superfast comprise of the Manettino selector knob, side-slip angle control, and variable steering. The automobile has been aerodynamically refined so as to remove any turbulence arising from the reduction of a fixed roof.

With a claimed top speed of 211 mph, the title 812 Superfast isn’t mere hyperbole. This curvaceous coupe is packaging a 789-hp 6.5-liter V-12 beneath its hood, driving the rear wheels and tires via a seven-speed dual-clutch automatic. An active diffuser and aerodynamically shaped body panels assist the 2019 Ferrari 812 Superfast in slicing through the air with minimal drag and on to its epic maximum velocity. What is the cost of all this awesomeness? More than $300,000, with values probably rising from there.

7 Supplies You Need To Clean The Interior of Your Car

A Review of the 2019 Hyundai Tucson