The Lucid Air offers a much-needed mid-step between the cars of today and the cars of tomorrow. Some are calling it a Tesla killer, but this electric sedan still needs to prove itself against the current leader of the electric vehicle market. Lucid has a few aces up its sleeve though in the form of former engineers from Tesla, a revolutionary design architecture, and deep investment capital from Saudi Arabia.

Model Trims for the Lucid Air 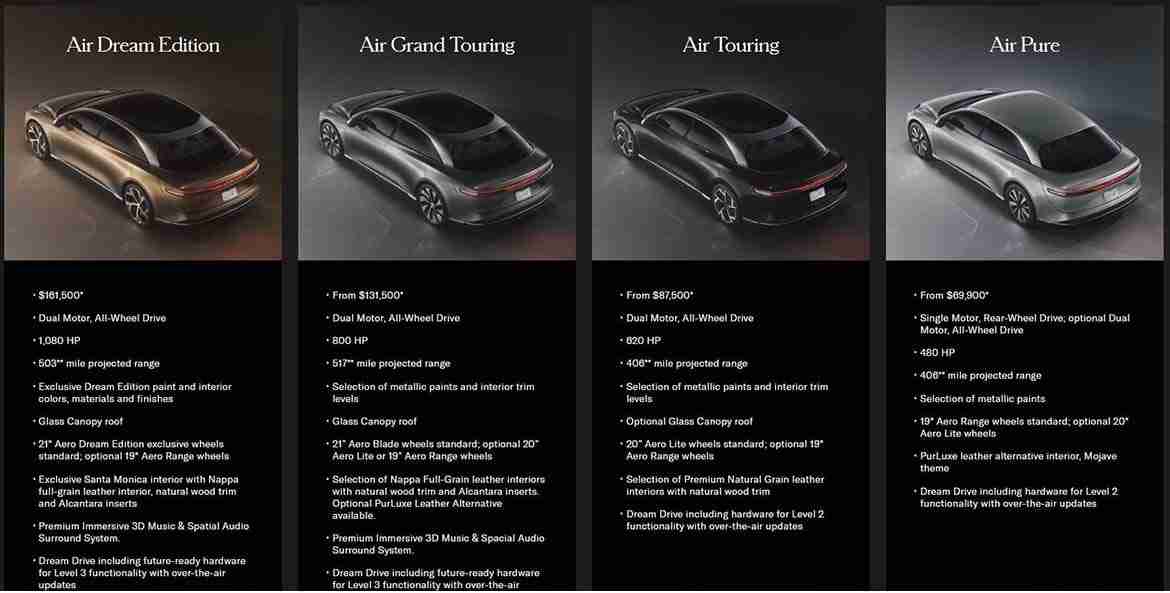 In a bold departure from Tesla’s lack of options and packages, Lucid is offering four model trims for the Air electric sedan. The base model is Air Pure and it comes with just a single electric motor and a 406-mile range. It has an MSRP of $69,900. Then, there’s the dual-motor, 620 horsepower, all-wheel-drive Lucid Air Touring model.

The next tier up is a dramatic leap in price. The Lucid Air Touring costs $87,500. The next-level Lucid Air Grand Touring carries an MSRP of $131,500 with the farthest driving range of the Lucid models. Finally, there’s the Lucid Air Dream Edition (see my build & price review) that cranks out 1,080 horsepower with exclusive style elements and finishes. It costs $161,500.

In comparison to the Tesla Model S, the entry-level Lucid Air is a bit more affordable. The 2021 Tesla Model S starts at $79,900. However, the lack of model trims for Tesla means that there are fewer stops along the way to jack up the price. The Plaid + model of the Model S is $132,990. Lucid has added a tiered model trim system like traditional automakers. This enables the price of the Air to soar way out of range for the average consumer looking for their first electric vehicle.

Peter Rawlinson, CEO, and CTO, of Lucid Motors, is a former Tesla employee. He was Vice President of  Engineering. It’s clear that his time at Tesla influenced his work on the Lucid Air. In a company press release, Rawlinson had this to say.  “The Lucid Air is a vehicle that thrills me personally because it delivers a level of performance, efficiency, and luxury that is currently unseen in today’s EVs,” said “Our vision from the beginning – what drives this company – is creating the world’s best EV technology while making it progressively more attainable over time.”

Time will tell how much wiggle room Rawlinson will allow on the exorbitant price of the Lucid Air.

Style Elements of the Lucid Air 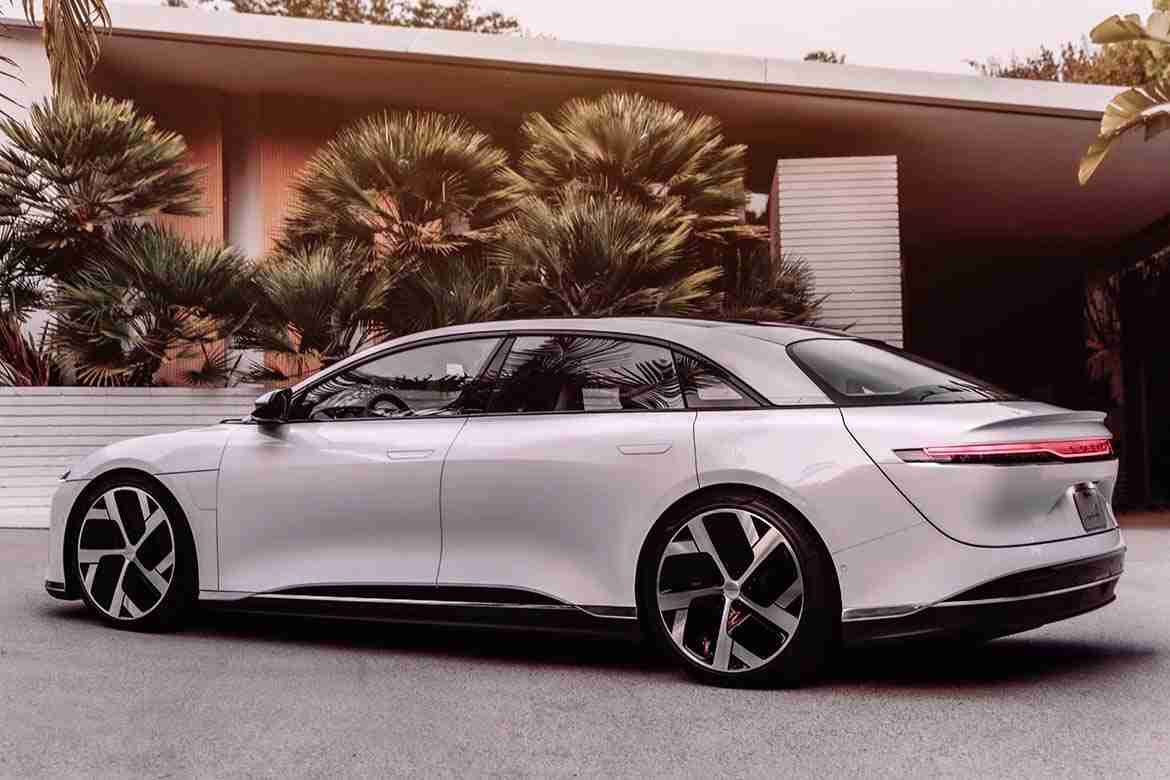 The Lucid Air has proportions that seem familiar. Yet, there are subtle changes to the vehicle that seeks to redefine the architecture of a luxury sedan. Lucid’s VP of Design is the former Head of Design for Mazda. The fluidity of the Lucid Air’s design is a page torn straight out of the Mazda playbook.

The Lucid Air has a well-sculpted, smooth exterior that creates a 0.21 drag coefficient. Lucid designers and engineers took inspiration from jets – luxury private jets and not fighter jets. The platinum look is included with the Grand Touring model. It has polished satin titanium accents with bright, contrasting aluminum inlays. The Air has a full glass canopy roof just like the Tesla Model S. It travels seamlessly from front to rear.

Your choice of wheels ranges from big to bigger. 19-inch black-painted wheels are small for the Lucid Air. 20-inch wheels are available but the 21-inch Aero Blade wheels that are featured in most of the promotional material for the Lucid Air seem to fit the vehicle just right. The wheelbase of the Lucid Air is 116.54 inches. The length is 195.88 inches. That gives it about the same dimensions as the Model S.

Lucid employed their own in-house lighting designers to give the Air a signature light array. The front of the electric sedan has intelligent micro headlights that react to the environment. The headlights are arranged in a narrow slit with six individual headlamps. In the rear of the Air, there’s a long, single-form LED taillight assembly.

While the exterior of the Lucid Air might lack a lot of style points with its fluid form, the benefits of such an unadorned exterior are transferred to the comfort of the interior cabin. For example, the rear doors open 90 degrees for easier entry and egress. The rear trunk has a wide clamshell design that makes the interior seem larger than it is.

The Limited Edition Dream model is the only one that comes with the sparkling gold metallic paint palette and Alcantara inserts for the interior. Otherwise, it doesn’t stand out cosmetically from the rest of the vehicles in the Lucid stable. Its allure comes from the 1,080 horsepower powertrain. 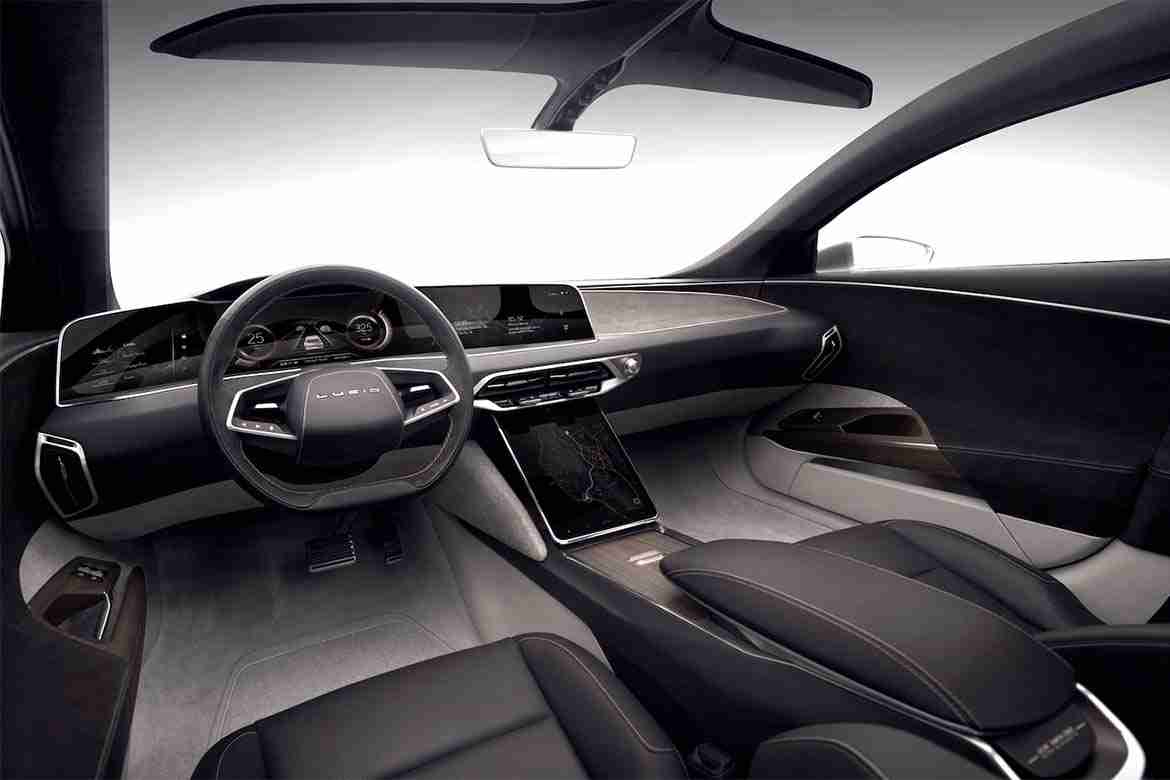 The interior of the Lucid Air draws inspiration from the California landscape. There’s high attention to detail that’s evident in the colors, finishes, fabrics, and stitching of the Nappa leather upholstery. It’s available in ceramic off-white, light brown Tahoe, and all black. If you happen to loath leather, then there’s a PureLux faux leather version of the black Mojave interior. All of the woodgrain is sustainably harvested and so are the recycled yarn and alpaca textiles.

One of the aspects of the Air’s interior that separates it from the competition is the contrasting zones. The front row has a cockpit aesthetic, but the rear bench has a different color scheme and amenities that are more focused on comfort. There’s this clear separation of functionality between the front and rear that’s a real departure from the Tesla Model S.

The Air has a flat-bottomed steering wheel with a few touchpads and toggles that seem to float in the center of the assembly. The instrument cluster of the Lucid Air is actually a gorgeous 34-inch curved digital floating glass display with 5K resolution. The center 10-inch touchscreen display in the center console has the vertical orientation of the outgoing Tesla sedan. The Lucid Air display can be removed to reveal a storage compartment underneath.

The interior of the Lucid Air has the space of a mid-sized SUV without all of the bulk. The electrified powertrain and battery bank have been miniaturized to fit inconspicuously under the floorboards. This maximizes the interior space for head and legroom. The rear bench with a standard battery bank has 37.4 inches. Even the long-range battery model has 35.8 inches of legroom in the rear. The driver and front passenger have a comfortable seating position, as well. There are 41.5 inches of legroom and 39.5 inches of headroom. The Lucid Air beats the Model S for rear-seat comfort but comes in about even for front-row occupants.

The front of the Lucid Air doesn’t house an internal combustion engine (ICE). It can be used for storage. The same is true for the Model S from Tesla. However, the Lucid Air has a cavernous trunk with a fold-down rear bench for maximum cargo space. Yet, there’s even more space back there. The rear floor panel of the trunk folds away to reveal a second trunk compartment underneath. The rear trunk offers 456 liters of capacity and the front (frunk) has 202 liters of cargo capacity. 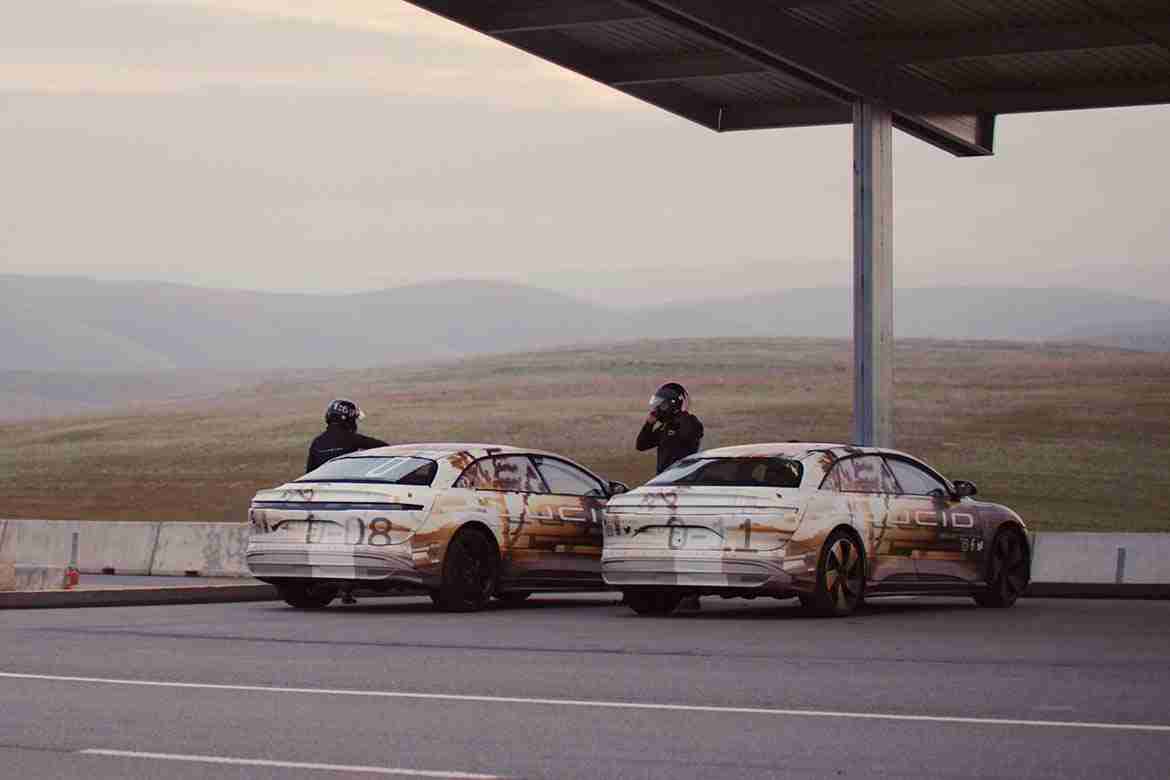 The Lucid Air has dual active core electric motors that run on four different output settings. The base model produces 480 horsepower while the top-of-the-line Dream Edition produces 1080 horsepower at 800 kilowatts. The Dream Edition travels from zero to 60 MPH in 2.5 seconds and reaches a top speed of 168 miles per hour.

All-wheel drive is standard on all versions of the Lucid Air platform. The suspension is controlled by semi-active dampers, standard torque vectoring, and electronic stability control. Otherwise, there isn’t much available information about the drivetrain and braking.

The Lucid Air has one of the fastest charging times of any electric vehicle. Owners using DC fast charging can expect to recoup about 32 kilometers a minute or the equivalent of 300 miles in 20 minutes. The base model has a driving range of 406 miles while the Grand Touring model gets 517 miles of driving range.

When it comes to efficiency, the Lucid Air trumps the Model S. The Model S from Tesla has a 412-mile range and maximum charging of 200 miles in 15 minutes with DC fast charging. It’s clear to see that the Lucid Air promises to outperform the Model S in nearly every category except acceleration.

How Safe is the New Lucid Air?

The Tesla pedigree shines through when it comes to the available packages. There’s a Dream Drive Level 3 package that supplies the hardware for autonomous driving in the Lucid Air. It also receives over-the-air updates to the Air’s software.

There are 8 advanced airbags inside the cabin. In total, there are 32 onboard sensors that provide the essential data for advanced safety and autonomous driving. Lucid hasn’t released any information about those autonomous driving features, but consumers can expect some form of lane departure mitigation, automatic braking, and driver attention alerts.

Designers of the Lucid Air expect a 5-star safety rating from the NHTSA, but those tests haven’t been performed yet. The architecture of the Air’s platform certainly imbues a certain level of safety. The heavy battery bank sits at the bottom of the electric sedan providing a low center of gravity and enhanced handling capabilities. The frame is composed of lightweight bonded aluminum, but the glass canopy leaves the Lucid Air with a top-down vulnerability. It offers little protection but increases outward visibility.

Lucid found a chink in Tesla’s armor and filled it with a luxurious electrified sedan. In an obvious act of hubris, Tesla designers made a bold indictment of superfluous refinements with their remarkably austere designs and minimalist interiors. Then, the Lucid Air drives up and reminds consumers just how much they used to love Cadillacs. The Lucid Air is a revival of opulence that is poised to propel consumers into the electrified age of motoring.

Well played, Lucid. Well played. The Lucid Air has an affordable entry-level model that offers unparalleled luxury for an electric vehicle. Yet, the Grand Touring and Limited Edition models will most likely stay on dealership lots well past their prime. Tesla will still have brand dominance with consumers, but heads are already turning toward Lucid Air.