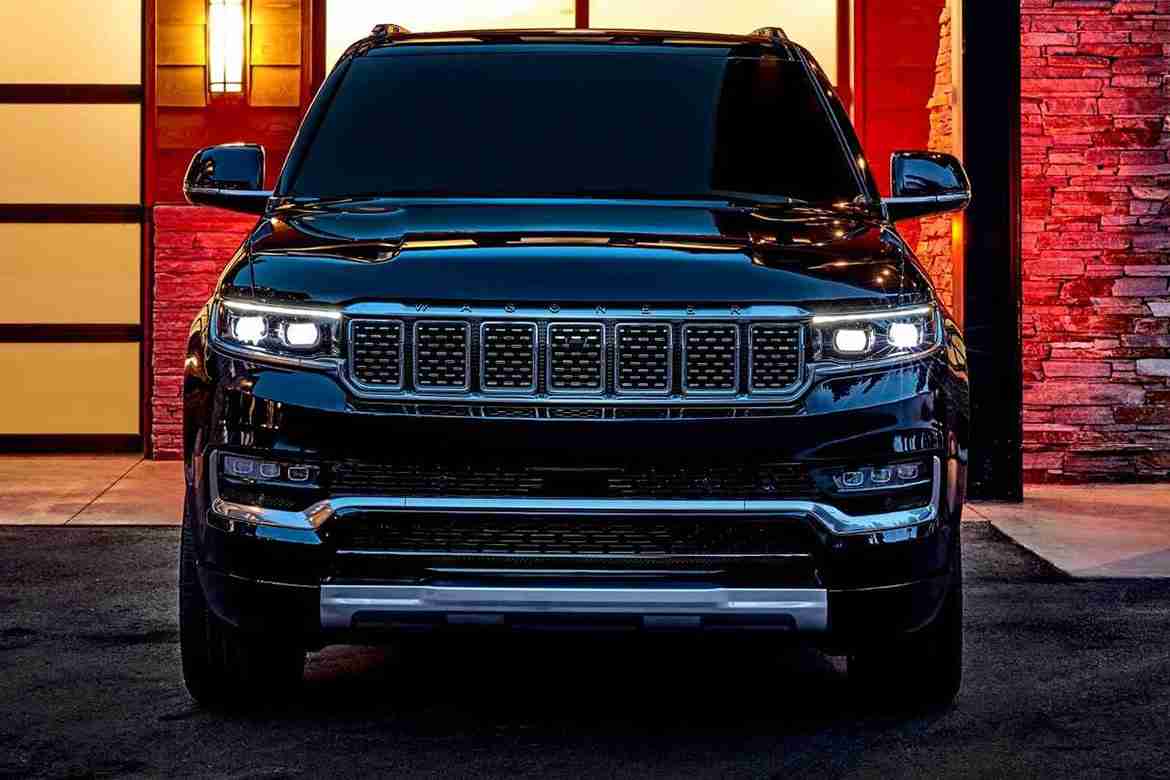 The Grand Wagoneer has been reborn as the premiere luxury SUV for Jeep. It has the ability to haul 10,000 pounds and has a plush interior that can rival luxury yachts. It’s a full-sized SUV with a V8 engine and 22-inch wheels. Top of the line models of the 2022 Jeep Grand Wagoneer can cost more than $100,000.

Either Jeep executives missed the electric vehicle memo, or they simply chose to provide the automotive market with a well-dressed dinosaur. In a company press release, Christian Meunier, Jeep® Brand Chief Executive Officer addressed the inspiration and focus of the new 2022 Jeep SUV. “We are ready to start a new exciting adventure with a model that wrote some of the most iconic pages in the history of the American automobile.”

Meunier went on to say, “Wagoneer and Grand Wagoneer are born from the Jeep brand, but they have a flair of their own, building on a rich heritage of craftsmanship and refinement, while offering new levels of sophistication, comfort and legendary 4×4 capability, as well as a new level of customer service.”

Review of the 2022 Land Rover Defender

There are four model variants for the Grand Wagoneer. The base model is Series I and it has an MSRP of $86,995, making it one of the most expensive entry level SUVs on the market. The nest level up is Series II and it comes with 22-inch polished wheels, premium leather and autonomous parking. Then, there’s the Obsidian model. It costs $98,995 and exerts itself as the custom style version of the Grand Wagoneer. It comes with blacked out grill and dark onyx inlays inside the cabin, plus a 23-speaker entertainment system. Finally, there is the Grand Wagoneer Series III. It is the top tier model and carries an MSRP of $103,995. Series III has all the top autonomous driving and safety features that Jeep has to offer.

There are so many more amenities for the 2022 Jeep Grand Wagoneer. So, let’s explore the vehicle in greater detail. 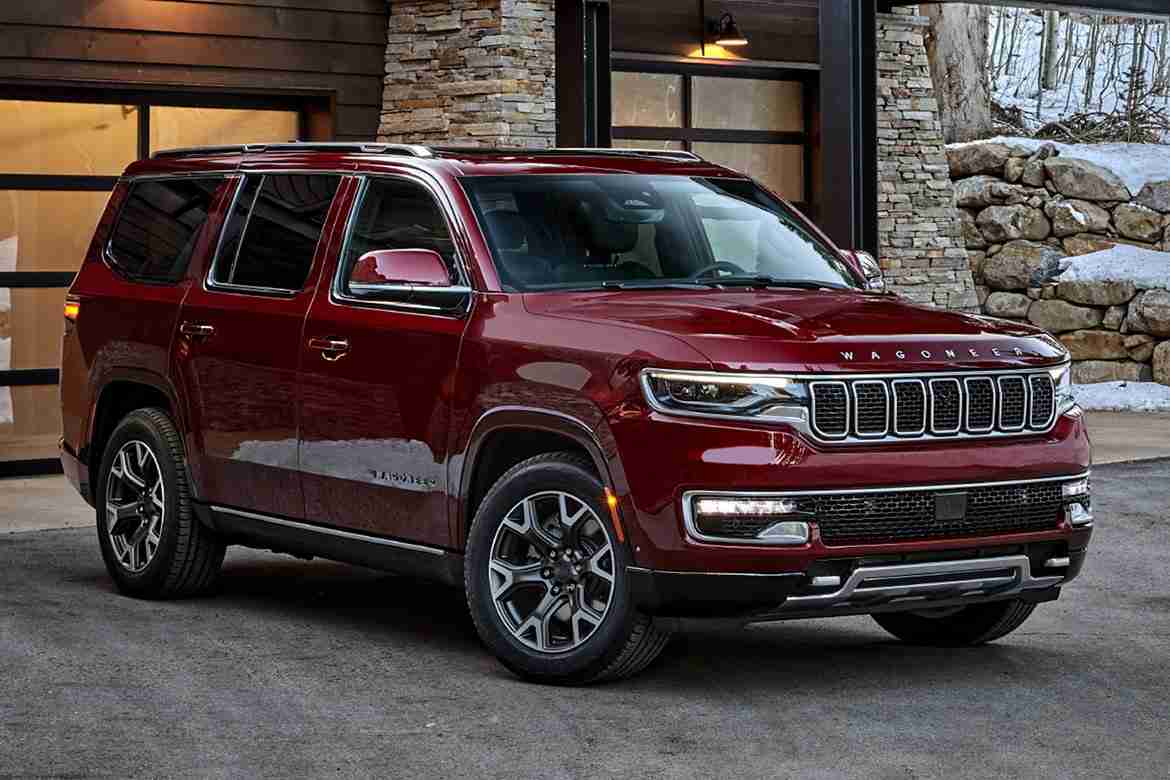 The 2022 Jeep Grand Wagoneer is the most expensive vehicle in the Jeep lineup. Take a look at Jeep’s luxurious new SUV.

The exterior of the 2022 grand Wagoneer is bold and expressive, as you would come to expect from big SUVs like the Suburban and Bentley Bentayga. The Grand Wagoneer has a high strength steel body on frame architecture that gives the Grand Wagoneer the rigidity it needs to carry its own weight.

The Grand Wagoneer has a black roof, power side rails with flared out fenders to create a commanding profile. The front fascia houses a new premium LED configuration and tow hooks to remind everyone on the road that the Grand Wagoneer has real towing muscle. The rear of the vehicle is upscale with a hands-free liftgate and the letters of the brand stretch across the width of the vehicle.

The front fascia of the new Grand Wagoneer has the signature grille design of a Jeep, but you won’t find much mention of the Jeep brand anywhere on the vehicle. Instead, the front fascia has the words Wagoneer across the grille. The logo is also on the rear, sides and the interior front seats. The word Jeep is absent from the design on purpose and that’s because the Wagoneer is slated to become a new luxury sub-brand.

You’ve seen this before; it’s becoming a popular trend. Hyundai gave the Genesis its own brand. Ford now has a Mustang sub-brand as well as a Bronco sub brand. The Grand Wagoneer represent the premium luxury segment of Jeep and there will undoubtedly be more vehicles coming down the pipeline.

Interior Refinement of the 2022 Grand Wagoneer 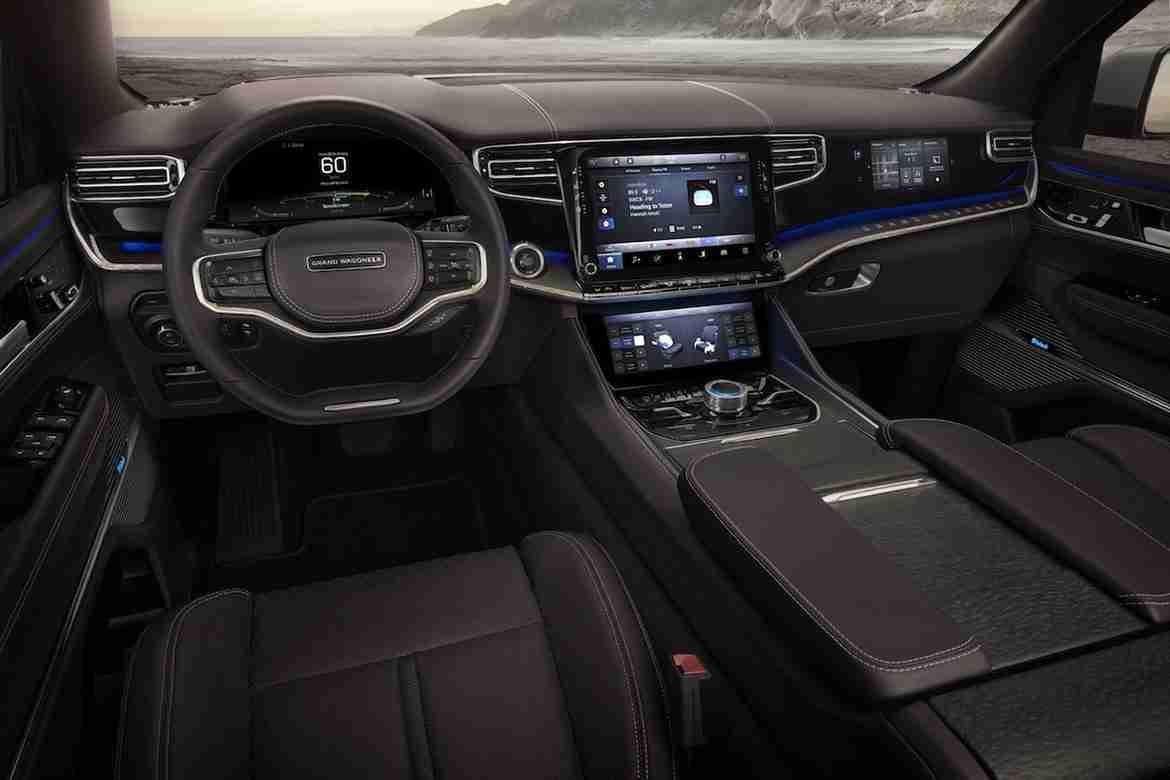 One of the highlights of the Grand Wagoneer is the attention to detail that goes into creating the vehicle’s interior. At just a glance, you’ll be inspired by the American craftsmanship, the choice of materials and thoughtful layout.

In keeping with tradition, there is an overabundance of wood grain inside the cabin. Satin American Walnut wood gives the interior the same aesthetic of a luxury yacht deck and drives home the upscale target audience of this vehicle. Aluminum trim and premium leather fill in the spaces between.

This glut of digital screens controls heating and cooling, navigation, entertainment, internet connectivity and surround view cameras. The 2022 Grand Wagoneer could double as a nightclub on wheels with copious interior space and a McIntosh 1,375-watt 3D surround system that bumps with a 12-inch subwoofer.

There are three rows of seating for 8 passengers and interested buyers can choose between a second-row bench or captain’s chairs at build out. The 24-way power adjustable seats in the front row have memory settings and you’d be excused for spending the better part of an hour tweaking the seating position to perfection. The second row seats fold flat and the rear bench is 60/40 split folding. With everything placed flat, you can slide just about anything inside the Grand Wagoneer. 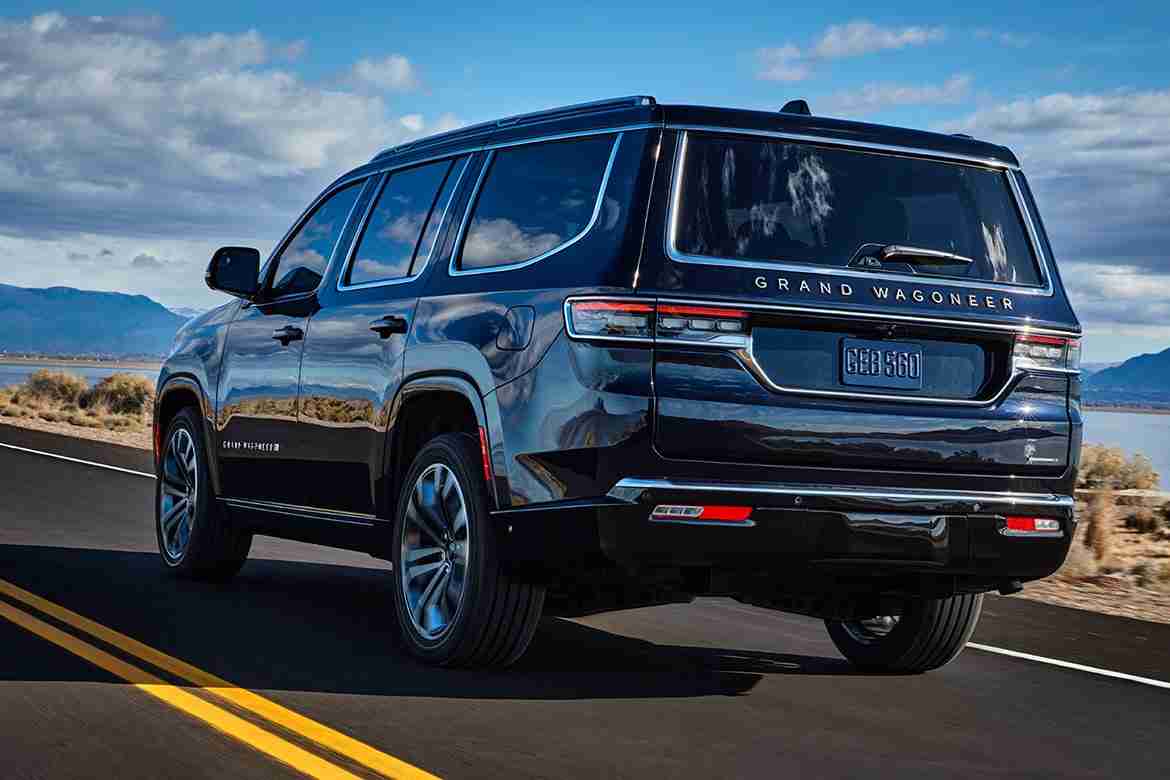 The 2022 Grand Wagoneer can tow up to 10,000 pounds when properly outfitted. It has a powerful 6.4 Liter V8 power plant under the hood. The intake and exhaust manifolds are unique to the new Grand Wagoneer. It also has variable camshaft timing and the ability to de-active cylinders for enhanced fuel economy.

The Grand Wagoneer’s engine produces 471 horsepower and 455 pound feet of torque. The powertrain delivers lots of low-end torque, but the range is rather broad so that the Grand Wagoneer can maintain traction and power in various conditions over large distances. The Grand Wagoneer comes with a TorqueFlite 8-speed automatic transmission. It can travel from zero to 60 MPH in six seconds flat. That’s pretty impressive for a vehicle this size. It won’t win any races, but drivers will feel confident enough to lay down some power to maneuver around.

The Grand Wagoneer has some impressive performance capabilities, but it hasn’t been trail-rated like other Jeep SUVs. That’s this vehicle’s naughty little secret. The grand Wagoneer is a large vehicle and although it has off-road packages available, the big luxury SUV won’t be required to pass some of the most vigorous off-road testing. In that sense, it truly is a departure from the Jeep lineup.

That being said, the Grand Wagoneer will still have three available 4×4 systems. The suspension system is electronically controlled. It can ford up to 24 inches of water, has a crawl ratio of 48:1 with 10 inches of ground clearance and features a terrain management system.

The Grand Wagoneer Series III has over 100 safety and security features. These include autonomous and driver-assisted features that would rival anything put on the road by Audi or Mercedes-Benz. The Grand Wagoneer comes with night vision for the surround view camera display along with pedestrian detection. The onboard sensors produce blind spot monitoring and lane keeping assistance. The driver is fully supported if he/she begins to feel drowsy on a long ride. The steering wheel will re-adjust the vehicle position automatically if the driver is less than attentive and fails to do so. Other advanced safety features include intersection collision assist, traffic sign recognition, and automatic emergency braking.

Final Thoughts on the 2022 Grand Wagoneer

The 2022 Grand Wagoneer will most likely be a popular fleet vehicle for record companies and celebrities. The Obsidian model has black wheels, black and chrome accents, and plenty of urban appeal. In any trim, the Grand Wagoneer has all the luxury trappings of a Bentley or Mercedes-Benz and the price tag to match.

It’s important to note that there is also a Jeep Wagoneer that premiers alongside the Grand Wagoneer. It costs about $30,000 less but lacks some of the grandiose refinery of the Grand Wagoneer. It will most likely turn the heads of auto consumers who fail to see the value of a six-figure vehicle but still feel nostalgic for the bygone era of big SUVs.

It seems as if Jeep is seeking to reclaim their brand dominance in the luxury SUV market, but are they too late? As consumer preferences scale down from large SUVs and away from internal combustion engines, it will be an uphill climb for Jeep to redefine or reclaim the luxury SUV experience with the Grand Wagoneer.