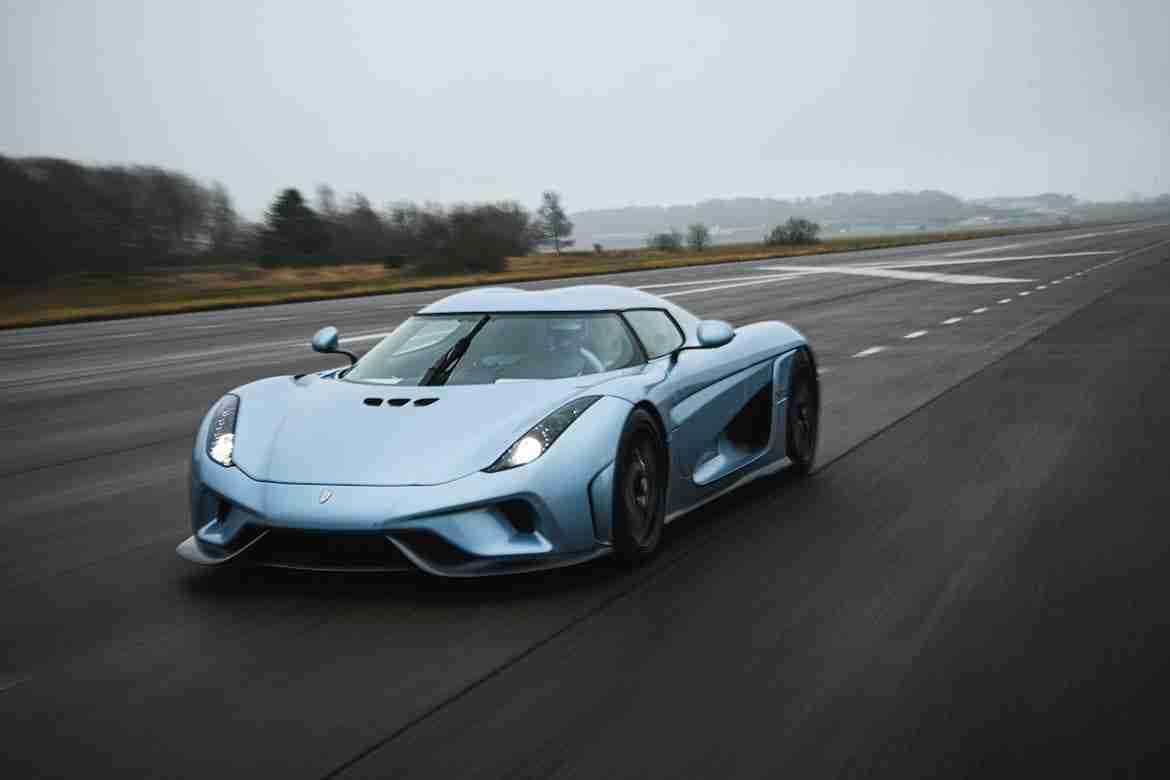 Auto enthusiasts are marveling over the all-new Koenigsegg Jesko, the latest supercar from Koenigsegg that promises to hit 300 MPH. It’s named after Christian von Koenigsegg’s father. Jesko Koenigsegg might have guessed that his son Christian would one day develop the world’s most high-tech supercars, but it wasn’t an easy road to the top.

Koenigsegg’s first vehicle was the CC prototype. It debuted at the Anderstorp raceway in Sweden in 1996. It had a 4.2 Liter V8 motor from Audi, but its most impressive features were design elements dealing with the vehicle’s exterior. It had a removable roof, carbon fiber paneling, and doors that pulled out and opened sideways.

The next time Koenigsegg raised eyebrows was at the Paris Auto Show in 2000. That’s when the automotive world got its first glimpse of the Koenigsegg CC8S. Only six production models were ever produced. Actually, the CC8S was built for crash test dummies, not super-rich yuppies. Koenigsegg needed a crash test car to navigate its way into the supercar mainstream. So, the CC8S helped pave the way for the CCX and Ageras that would come later. It was their first production vehicle and had a supercharged V8 engine that produced 655 horsepower.

This was their first inhouse powertrain, but people were still talking about Koenigsegg’s unique style. In a way Koenigsegg was still establishing its brand, and people were more thrilled with the aggressive body style even though the CC8S was super powerful. In 2002 it set the Guinness World Record for the most powerful production engine.

The CC8S put Koenigsegg right in the middle of the top speed race with McLaren and Bugatti. In 2014 a new vehicle was released. The CC4 was an even more aggressive version of the CC8S. It had an improved suspension and chassis but lost the top speed battle to the Bugatti Veyron. The CC4 might have narrowly missed the top speed crown, but Koenigsegg still had the most powerful powertrain in the world. It’s important to note that just the year before, Koenigsegg’s production facility in Margretetorp burned to the ground. So, the achievements of 2004 were hard-fought and doubly sweet.

The Koenigsegg CCX was the next evolution of supercar, gaining the top speed record in 2006 and holding it for seven years. The CCX was special because it was ultra-rare and was designed to meet international safety standards. The CCX would see several different variations over the next few years and continue to be a record-breaker. The 2009 CCXR had the industry’s first paddle shifters and could run on biofuel. The limited-edition CCXR Trevita had a white carbon fiber body that sparkled in the light. 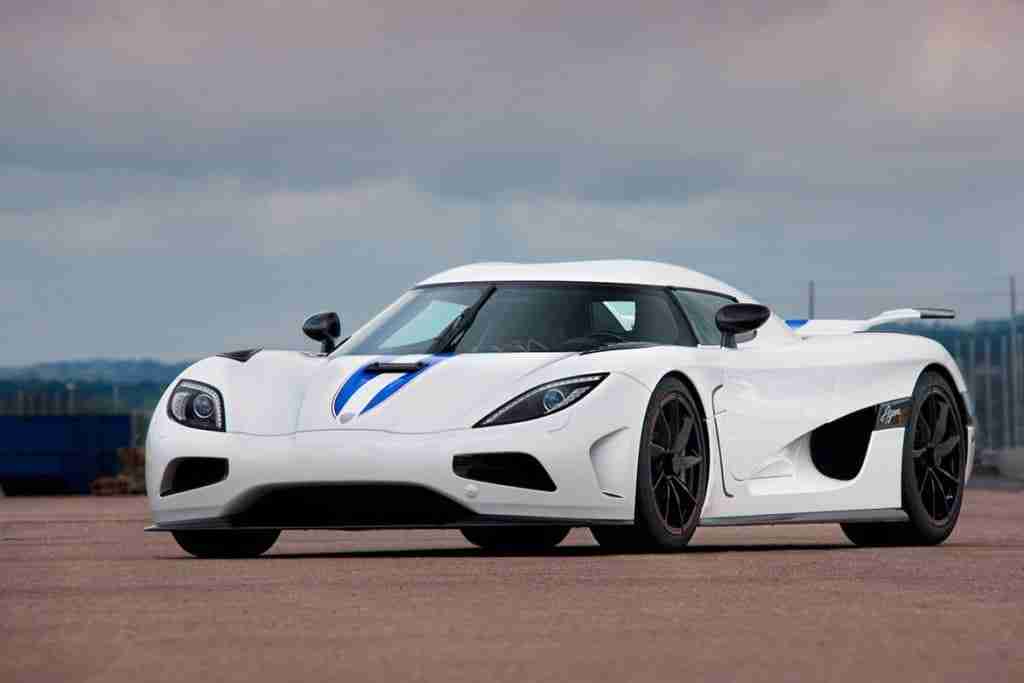 2010 began the Agera era for Koenigsegg. The first Agera had a 5.0 Liter twin-turbo V8 engine that produced 960 horsepower and 811-pound feet of torque. Superchargers were out and turbos were in. The name means to “take action” and that’s certainly what the brand did with this vehicle. Koenigsegg had finally arrived at the forefront of the hypercar stage with a truly iconic platform. It was named “Hypercar of the Year” by Top Gear.

The Agera had a 7-speed dual-clutch transmission that was developed by Koenigsegg. The Agera was super lightweight. It had carbon fiber engine parts and the first-ever VGR wheels. These lightweight wheels were all forged and machined individually.

The next vehicle in the chain was the Agera R. Eighteen models were produced between 2011 and 2014. The new model Agera had Koenigsegg’s own ceramic brake pistons. It had an adaptive spring-loaded rear wing, carbon fiber front fascia, and a new exhaust system. The Agera R was updated with carbon fiber wheels in 2013 and Koenigsegg developed a fueling system that could alter and shift power to the engine based on the type of fuel present. The Agera R claimed the 300 MPH world record by traveling the distance in just over 21 seconds.

The Agera S was made in 2013 for drivers who wanted to operate their hypercar on low octane fuels. It was basically the same as the Agera R except for the fuel option. There is an ultra-rare Koenigsegg Agera S named Hundra. It was the 100th Koenigsegg vehicle produced and the Hundra has real gold leaf inlays inside the cabin.

The Agera timeline was briefly and dramatically interrupted in 2014 by the world’s first mega car – the Koenigsegg One:1. This new vehicle from Koenigsegg had many of the same Agera performance components. There were variants of the twin-turbo V8 engine and dual-clutch transmission.

However, the Koenigsegg One:1 produced a power output of 1,341 horsepower. That’s more than a Megawatt of power. It had a power to weight ratio of 1:1. That was a true aerodynamic innovation. The One:1 also had improved air vents and scoops, as well as custom-built tires and suspension.

The Agera RS was produced between 2015 and 2018 as an updated Agera R. It borrowed heavily from the One:1 and brought track performance back to the street. You can put regular gasoline in the Agera RS and it can still produce 1,160 horsepower. There were 25 units produced and each one could be fully customized by the owner. At the 2018 Goodwood Festival of Speed, three final production Ageras were publicly displayed to retire the Agera badge.

Koenigsegg is poised to enter the next phase of its development with the Jesko and the Gemera. As mentioned earlier, the Jesko is aimed at the production car speed record. There’s a street version – the Jesko Absolut – and a track-ready Jesko with an extreme downforce rear wing.

The Gemera is the first Koenigsegg vehicle with seating for four passengers. Just because it has a back seat that doesn’t mean that the Gemera won’t have all the insane power of the hypercars that came before it. The Gemera will blow the doors off most supercars on the road and it has assisted driving features like lane assist and autonomous driving.

Koenigsegg has produced some of the most impressive supercars and hypercars ever imagined. The brand is synonymous with insane speed records and automotive innovations. Yet, the history of Koenigsegg wasn’t like most supercar brands — slow and steady. Koenigsegg rocketed straight to the top.